In this new series on the blog, I intend to occasionally highlight the targets and associated drills that I have been using at the range. Since my normal range day is Tuesday and since alliteration is catchy, I’m going to call these occasional posts “Target Tuesday” and will always publish them on a Tuesday!

For the first iteration of this series, I wanted to discuss the “Aiming for Zero” target offered by Tetreau Training. I learned of the target while listening to a recent American Warrior Show podcast. Aiming for Zero is a charity program designed to prevent veteran suicide through outreach and support programs. To contribute, order the targets, shoot a simple 50 round course of fire that focuses on the fundamentals, take a picture of your target, and submit it with a ten dollar donation to be entered to win one of two Sig P320s. The high score will win a Sig P320 X-5 and one random entry will win a Sig P320 RX. From what I understand, you can submit as many targets and donations as you wish. Contest entries may be submitted through September 4, 2017, so this is somewhat time sensitive if you wish to participate.

I ordered a five pack of targets and received them in the mail in just a few days. In addition to the five AFZ targets, a Tetreau Skill Builder III target was also included. I intend to shoot the five targets over the next few weeks, perhaps with different pistols, and send them in with donations. The cause is worthy, the targets offer good practice on the fundamentals of marksmanship, and there’s chance to win a gun! 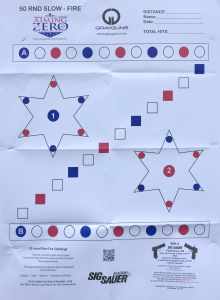 I shot the target for the first time at the range last week, using my G19 Gen4. I am embarrassed to say that I only scored a 23. This is Dot Torture on steroids! The target incorporates a series of horizontal circles, circles in star patterns, and diagonal squares. These are small aiming points that require absolute focus on the fundamentals to hit at five yards! This target will also teach you the exact relationship between your point of aim and point of impact at five yards. The target is designed to be shot slow fire, and shooting too fast will probably not yield the desired results! Obviously, my goal will be to improve my score over the next few weeks, but I don’t think there’s any danger of my winning the P320 X-5…

So, if you want to enter the contest and contribute to a worthy charity, order some targets and get out to the range!

(Standard disclaimer applies… I have no affiliation with any of the above referenced organizations other than having bought some targets.)