Well, folks, my progress continues in IDPA world.  Two weeks ago I posted the results of my first match of 2017, which was my best to date.  This time, shooting in a challenging match in which a lot of fellow shooters struggled–and in punishing heat and humidity–I reached a new personal best.

My equipment for this match was my usual.  I used my Generation 3 Glock 19 with Ameriglo I Dot Pro sights, F3 Holsters slide modular holster, and no-name kydex double-magazine pouch on the Ares Gear Aegis Enhanced belt.  Despite the heat and humidity—and unlike the last match—cover garments had to be worn.  I used my Eddie Bauer camera vest.

I will note here that I chose to use different ammunition for this match.  Because we do not get to collect brass after the matches at this club, last year I bought a case of Wolf 115 grain FMJ ammunition to use for matches or in some classes.  Other than function testing with about 25 rounds some months ago, this was the first time I used Wolf, or any other steel-cased ammunition, in my Glocks.  I suffered two malfunctions over the course of the match. One was a failure to feed, which occurred when the follower in the magazine I was using did not push up the rounds.  This magazine only does this with steel-cased ammunition.  The other malfunction was a failure to extract, which a tap-rack dealt with.   I should also note that this was the first live-fire I had done since the match two weeks prior.

As noted above, the weather for this match was tough, even worse than the match two weeks before.  The temperature when I left the club at 1 PM was 94 degrees, with strong sun and very high humidity.  There was virtually no breeze in the pistol bays.  Over the roughly four and a half hours I was there, I drank ridiculous quantities of water and Gatorade.

This match was a little unusual in that it was a two-day match (Friday and Saturday).  Some people chose to shoot both days, often in two different divisions or simply using two different pistols that both fit into one division.  The courses of fire (six in all) were identical from Day One to Day Two.

The six courses of fire were quite challenging.  This is not just my opinion, but that of many I spoke with.  There were shots that had to be taken from as far away as 24 yards on one stage and 20 yards on another, lots of no-shoot targets in amongst the threats and plenty of partially obscured threats behind “hard cover”.  There was one stage that required shooting from retention, several that required shooting while moving, another that required strong-hand only shooting (while moving), several required tactical reloads (GOD, I hate that term!), and lots of use of cover.  While there were no moving targets of any type in this match, one additional challenge was that only one of the six stages was “unlimited” (unlimited means that you are not restricted in the number of rounds you may fire, i.e., you can shoot “make up shots” and only your best shots get scored).  The limited scoring of the other five stages meant that all shooters really had to focus on getting their hits, and I found it a challenge on a few stages to keep track of which targets I had already engaged.

Here are a couple of photos I snapped of the stage descriptions, just to give the readers an idea of some of what was expected of us: 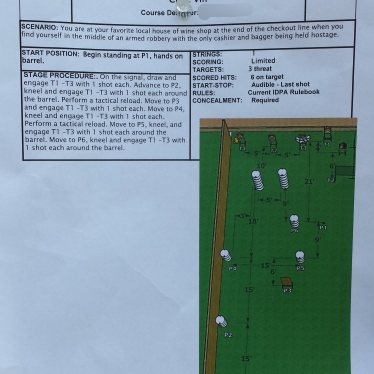 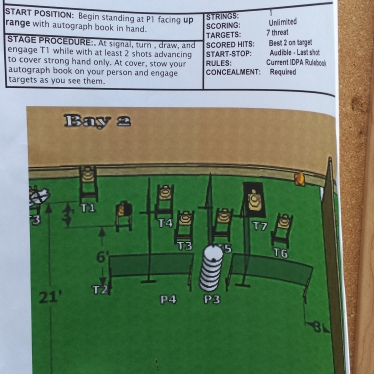 I finished the match 11th out of 43 overall, and 3rd out of 20 in the SSP division.  My best stage was the fifth I shot that day, which had the shooters engaging four partially obscured targets with one round each while moving backwards from one cone to another.  We had to continue to engage while moving all the way back to the 24 yard line, at which point we could fire our final four (of 16 total) rounds from behind cover while stationary.  On that stage, I finished 3rd overall.  My worst finish on any stage was 25th (my first stage of the day; had one of my malfunctions on this stage), but I also ranked 6th  overall on my fourth stage of the day.

Other statistics of note are that, of all the shooters in this match who were rated as Sharpshooters in IDPA, I was the highest finisher in the SSP division.  All the Sharpshooters who finished ahead of me were shooting in the ESP division.  So I feel pretty good about that.  Also, though I lost a few points for hits on a non-threat, I did not lose any points for “procedurals” such as not retaining magazines on a “tactical reload”, foot faults, not engaging in “tactical sequence”, not shooting while moving, etc.  So it seems that I finally have a few of the nuances of shooting in IDPA figured out.

Overall, I am very pleased with this performance.  Of course, the thing with IDPA is that, other than the Classifier, the courses of fire are always changing, so I am not sure if I was better this match or if most of those around me were worse.  I felt pretty good when I left the club about my performance, as on the distance shots I was shooting groups while others in my squad were clearly out of their element.

John had an interesting comment when we communicated after the match.  He said that it will be interesting to see if I perform better in the next class I take.  In actuality, however, while I think there are elements of a two-way street, I mostly see the classes I have taken improving my performance in IDPA, not IDPA improving my performance in classes.  And, in a way, I suppose that is how it should be, with classes being the place where I learn new–or improve upon old–skills, and IDPA being the place to practice at least some of those skills.

I have some other thoughts about IDPA based on some things that I observed at this match, but I will write about them in a separate article soon.  In the meantime, I will let our readers know that I will probably  not shoot another match until late August or sometime in September, primarily due to familial obligations.  The only sad thing about this fact is that I will miss a Classifier.  This is unfortunate because I have not yet shot the “new” Classifier and really wanted to try it out.  I would also really like to make “Expert” on the Classifier.  Hopefully, this club will offer another Classifier this Fall.

As always, thanks for reading.  If you have any questions or comments, please share them below or on our Facebook page.  We always love to hear from our readers, as feedback—positive or negative—helps shape what we do.

6 thoughts on “My Second IDPA Match of the Year”