Spend enough time on any of the gun forums, as I tend to do, and the question invariably comes up:  “What guns are in your carry rotation?”  On manufacturer-specific forums like GlockTalk, Sigforum, etc., the handguns that are featured in the members’ carry rotations tend to be “variations on a theme”, i.e. several pistols from the same manufacturer.  So one might see rotations consisting of a Glock 43 and Glock 19, or a S&W Shield and a full-sized M&P, or a Sig Sauer 239 and 229.

However, a visit to some of the websites not “dedicated” to a particular manufacturer often yields different answers.  For example, in one such thread, someone mentioned how his carry rotation includes a CZ P07, a S&W Shield, a Sig 320 Carry, a Sig 232, a 1911, and the ubiquitous S&W J Frame.  When someone asked what criteria he uses when choosing from this array, he replied that it was a combination of dress requirements that day and “mood”.  Over the years, I have found this attitude, for lack of a better term, to be fairly common.

Some might flame me for this, but I must say that I am not really a fan of such “carry rotations” for the average civilian concealed carrier.  For the record, despite all of the training I have had, I pretty much lump myself into this category of concealed carrier.  Having taken so many classes, including a number with members of the “been-there, done that” crowd, one thing they all seem to stress is the K.I.S.S. principle.

I have seen plenty of people who carry from a diverse set handguns claim that they have no issues switching from a revolver to a Glock, or a Sig to a 1911.  “Once it’s in my hand, I know what it is, and ‘muscle memory’ takes over.”  Sure, I know we’re all snipers with a handgun.  But my own experience suggests otherwise.

I have not been shooting in IDPA for very long, having so far competed in five matches plus a classifier.  However, even within the confines of this limited experience, I have, several times, witnessed competitors who typically compete with one platform (Glock, for example) make critical errors in pistol manipulations when shooting another platform (1911, for example).  While I have no idea of the overall competency that such people have with their less-used handguns, two things that I am confident about are that they feel some pressure when the buzzer sounds and that they want to do as well as they can.  In other words, they feel some measure of stress (presumably, not nearly as much as they would experience in a real-world, life-or-death situation) along with intrinsic motivation to put in the practice-time ahead of the event.  And yet they will forget to swipe off the thumb safety, or miss a slide-stop lever during a reload, etc.

My wife drives a minivan, but occasionally I drive it.  When I get into the driver’s seat and am looking to get on the move quickly, I have found that I almost always reach toward the floor, where the gear-shift lever is located in my car, rather than up on the console, where it is located in the van.  When I am moving slower and can consciously think about it, I do not make this misstep.

One thing that I have learned in many of the classes I have attended is that, when the chips are down, everything I do with my handgun needs to be automatic.  The draw, grip, presentation, sight alignment, etc., all must be accomplished with unconscious competence.  The reason for this, of course, is so that my brain can concentrate on solving the problem(s):

I do NOT want to be thinking:

·         Does this pistol have an HK-style magazine release or a simple push-button?

I have a carry rotation.  It consists of a Glock 43, a Glock 26, and a Glock 19, and then I use a Glock 17 as my nightstand gun.  The three double-stack models are equipped with the same triggers (smooth-faced OEM Glock 17 triggers), and all the models have the same slide-stop levers (Vickers/Tango Down), grip-tape on the top of the slides, and the same sights (Ameriglo I Dot Pros with the orange front).  The only exception to these choices is my Ruger LCP, which is carried VERY rarely.  Even then, though it is obviously a significant departure from the Glocks, it at least operates without a manual safety lever. 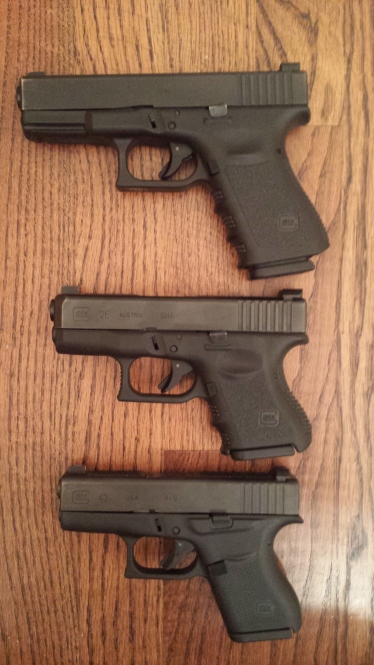 Logic suggests to me that there is a lot to be said for consistency in training and practice, in consistency in what is carried, and in consistency in where it is carried.   Yes, sometimes we have to make exceptions due to legal or dress requirements, but personally, I try to maintain as much consistency as possible.  Can someone with my level of training—or less–carry from a wider selection of platforms and be successful if the worst happens?  I don’t know.  Maybe.  But I would rather not find out.

As always, thanks for reading.  If you have any questions or comments, please post them below or on our Facebook page, as we always welcome civil discourse.  Keep training and practicing, and stay safe out there.

7 thoughts on “The Carry Rotation”