The title of this post may seem a bit redundant, but I wanted to emphasize a vitally important point. That is, you must pattern your shotgun. No two shotguns, not even from the same manufacturer, will necessarily pattern the same. To quote Tom Givens, every shotgun barrel is a “unique snowflake!” Thus, if you are going to rely on a shotgun for defensive purposes, you need to go to the range and pattern your gun with your choice of ammo to see what it is capable of.

I have actually only just recently really researched how to pattern a shotgun for defensive use, and I thought the topic was worth a few blog posts. As well, I wanted to find out for myself exactly what my new 870P SBS is capable of. As I mentioned in a recent AAR, I learned in discussion with Tom Givens that the gold standard of Federal FLITECONTROL doesn’t actually work all that well out of the modified choke on Remington 14 inch barrels. Rather, FLITECONTROL is better suited for open chokes. Indeed, it performs beautifully out of my cylinder choke 18 inch barrel, but not so much out of my 14 inch barrel. I will probably wind up sending my short barrel off to Hans Vang to work his magic unless I can find an alternative load that patterns to my satisfaction.

Over the past several months, I have been slowly collecting various examples of buckshot while I waited to receive the approved Form 4 for my 870P SBS. I have the various buckshot that I ordered from Target Barn, some boxes of commonly available buckshot that I found at my local Cabela’s, and even some old buckshot that I found in a box that I’ve had for literally decades. I intend to test them all over the course of the next few weeks and share my results here on the blog over the course of a few posts. Robert has also been working on a shotgun patterning article and will probably share his results as well. Look for some consistent patterns (no pun intended), but also perhaps some surprising differences. Ultimately, I hope that our combined experience, even when testing the same ammunition, will emphasize the point that you need to pattern YOUR shotgun with YOUR ammo.

As mentioned above, patterning a shotgun is vitally important to do before you rely on it for self-defense. You should know which loads pattern best out of your gun and how much the pattern will spread at the various distances that you expect to use the shotgun. This is similar, but distinctly different from patterning a shotgun for sporting use due to the distances and projectiles involved. Rather than knocking a lightweight moving target out of the air with a cloud of birdshot, we are concerned here with incapacitating a hostile grown man with a load of buckshot at what are essentially pistol distances. Contrary to popular misconception, in the anti-personnel context, you do actually have to aim a shotgun to achieve the desired result!

As I began testing my new 870P SBS, I wanted to know two things specifically. First, could I safely make a head shot at room distances? Second, what was the maximum range that I could engage a target and be relatively assured of putting all pellets into the vital zone without flyers?

To answer these questions, I decided to first fire one round at five yards (the average distance across a large room) into the head box of a standard IDPA target. This allowed me to check point of impact against point of aim, and also let me know whether a hypothetical hostage rescue shot would be possible with the load. (Despite the short range, I’ve found that this initial shot pattern is a good predictor of results at farther distance.) I next fired three rounds at 15 yards to determine the actual pattern of the shot out of my barrel. By way of example, I wouldn’t attempt to zero a rifle with one shot, but rather with a three shot grouping. Think of patterning a shotgun as firing a grouping of shots. The ideal is a concentric circular pattern with even coverage and all pellets impacting within the vital zone. Finally, I fired a final shot at 25 yards to see whether all pellets actually stayed on the IDPA silhouette. Before the final shot, I negatively taped everything outside the down zero to accurately account for pattern spread outside of the vital zone. The above protocol works well with the typical five shell box of ammo, allows me to get at least an idea of performance at the extremes of room distance vs. outside in the curtilage of my property, and gives a legitimate assessment of the pattern spread at the mean distance between those two extremes.

I’m going to conclude this post with some examples to reinforce what I’ve written above. I’ve already tested Herter’s Select Defense 00 Buckshot from Cabela’s (an economical load that is ostensibly marketed for defense), Hornady Critical Defense with the Versatite Wad, and Federal Premium Law Enforcement Maximum 9-Pellet 00 Buck with the FLITECONTOL Wad. 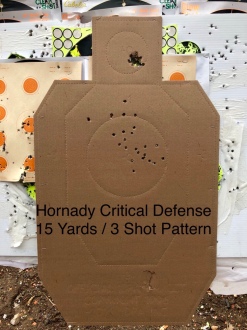 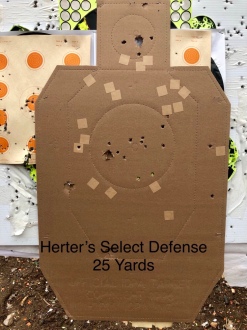 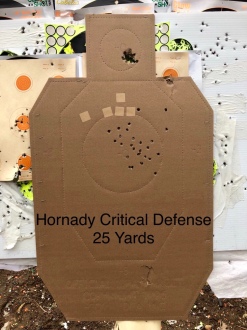 So far, Hornady Critical Defense is obviously the clear winner at all distances, and true to what Tom Givens told me, Federal FLITECONTROL performs comparatively poorly out of my modified choke barrel. Furthermore, I would characterize the Herter’s Select Defense as false economy compared to premium buckshot. In fact, while it’s difficult to see in the photos, the Herter’s Select Defense was the only pattern that spread off the IDPA silhouette. I count at least two misses, one on each side high.

Stay tuned for more results of my pattern testing, and if you keep a shotgun at home for defense, go to the range and see what it will do!

As always, thanks for reading. If you’re not already, please follow us here on the blog or on our Facebook page. We welcome comments, questions, and civil discourse.