Last weekend, while everyone else was watching the Royal wedding, I was traveling to train in one of my favorite states. John Murphy of FPF Training was kind enough to invite me to attend his “Concealed Carry: Advanced Skills and Tactics” class held in southern New Hampshire. Robert has taken several of Murphy’s classes, and has always had positive things to say. I’ve taken several classes from guest instructors hosted by Murphy at his home range in Culpeper, VA, but until this past weekend, I must confess that I had never actually taken one of his classes. I’m glad that deficiency has now been rectified.

I was especially looking forward to the class simply because it seemed to be an ideal synthesis of several interrelated disciplines. Murphy’s curriculum is in his words, designed to create market differentiation and to give students what they really need. In other words, skills in context. This is a departure from much of the available training in the industry, where students may show up kitted out in full battle rattle that they will probably never have any real expectation of needing. Conversely, being mugged or carjacked at the gas pumps when they are tired, distracted, or running late is a much more realistic possibility. Preparing students for what could be the worst day of their life is is a task that John Murphy obviously takes very seriously.

The class was hosted by NE Shooters, LLC and was held at the excellent Pelham Fish & Game Club. There were eleven students of varying experience levels, literally ranging from relatively new shooter to experienced instructor. I think it’s safe to say that all learned a lot and left class better prepared than when they had arrived. Shout-out to Raven Firearms Training! Every good instructor that I know continues to take classes from their peers in order to continue their own education and development.

Day one began in the classroom, with introductions made and waivers signed and collected. Over the course of the day, Murphy firmly established the context of his curriculum through lecture topics and PowerPoint presentations, and he showed several examples of violent encounters captured on surveillance video. This allowed him to explain common criminal attack paradigms and discuss appropriate responses. Note the use of the word “response” as opposed to “reaction.” One of the objectives of this class is to teach the student to respond, rather than just react. The first day also involved practicing both soft and hard skills, with interactive blocks of instruction involving pepper spray, managing unknown contacts (MUC), and hemorrhage control.

(Those that have taken training from Craig Douglas of Shivworks will recognize the MUC terminology. Murphy borrows from and frequently references other outstanding instructors such as Craig Douglas, John Farnam, Massad Ayoob, Kelly McCann, Tom Givens, John Hearne, Chuck Haggard, and others. Although he has put his own spin on much of the material, he was always quick to give proper attribution, and his curriculum has obviously benefited from his wide range of experience as a student himself. Much like Greg Ellifritz, I would venture to say that Murphy is well on his way to becoming one of the premier trainers in the industry.)

During a break, Murphy gave each student a Sabre MK6 Inert pepper stream trainer. After a thorough introduction to the subject in lecture, we ventured outside for some hands on practice. Although I have had some brief instruction in the use of pepper spray, I had never actually had the opportunity to use a trainer in class. Doing so is definitely a worthwhile experience. Murphy discussed what he prefers and why, and gave the students some options for carry to play around with. Ultimately, I think I agree with his rationale for using the support hand to access and deploy the spray. He also had the recommended spray available for purchase at a good price, and I took advantage of this opportunity at the end of class. I’ve never really consistently carried pepper spray before, but I’m going to make a committed effort to do so now.

Next, after some more classroom lessons on managing conflict and hostility, we again moved outside and practiced managing unknown contacts and integrating our inert pepper spray into the mix. This exercise laid the groundwork for where we were headed by having us move our feet while talking and deploying appropriate force as needed. 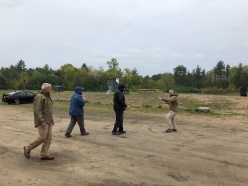 Later, after some more lecture, we were given the opportunity to practice applying Israeli Battle Dressings and CAT tourniquets to ourselves and each other. Blow out kits and hemostatic gauze were covered as well. Rather than being an exhaustive overview of the subject of Tactical Combat Casualty Care, this was instead just a brief introduction of basic need to know material. Murphy also covered specific recommendations for further training and supplies. Dark Angel Medical, Lone Star Medics, and Active Response Training were all highly recommended. As a medical professional who has trained with the latter, I will echo those recommendations.

Murphy continued in the classroom with discussions on the O.O.D.A. loop, Recognition Based Decision Modeling (RBDM), pistol ballistics and anatomical targeting, and a final conclusion in which he laid out a series of commandments or “dicta” to live by as an armed civilian. After class, a majority of the students joined Murphy at a local restaurant for dinner.

To try and put day one into perspective, I took 11 pages of notes on college lined paper during the course of the day. Murphy’s video library is exhaustive, allowing him to illustrate almost any typical scenario. Near the end of the day, he played the entire interview with Lance Thomas on “Justice Files.” If you’ve never seen it, go look it up on YouTube. There is much to learn from the man’s experience in terms of mindset and preparation for violent conflict.

Day two began early on the range with a safety brief and medical emergency brief. As I am becoming accustomed to, I was designated as the medic. To quickly gauge just where the class was starting at, Murphy began by having each student individually shoot the Fundamentals, Accuracy, & Speed Test that was created by the late Todd Green. I pulled off an 8.43 cold (having not shot my pistol in about a week and a half), which is nothing to write home about, but was nonetheless a personal best for me.

The drills continued at a steady pace for the remainder of the day. I’m not going to detail everything we did on the range, and I probably couldn’t even if I wanted to since the pace of the day precluded any substantial note taking. Murphy quickly moved us through the concealed draw stroke and the fundamentals of marksmanship with a heavy emphasis on accuracy and then the drills began involving increasing levels of stress and task loading with the incorporation of appropriate verbalization and movement. I really appreciated his range commands, as his choice of words really emphasized the visualization aspect of performance. As well, Murphy demonstrated every drill before we attempted it, another hallmark of a good instructor. 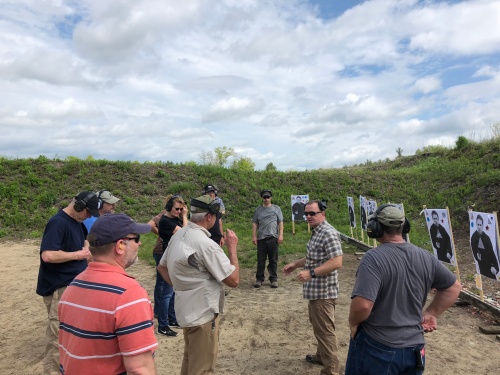 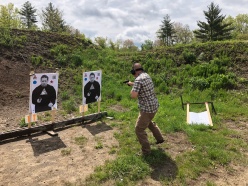 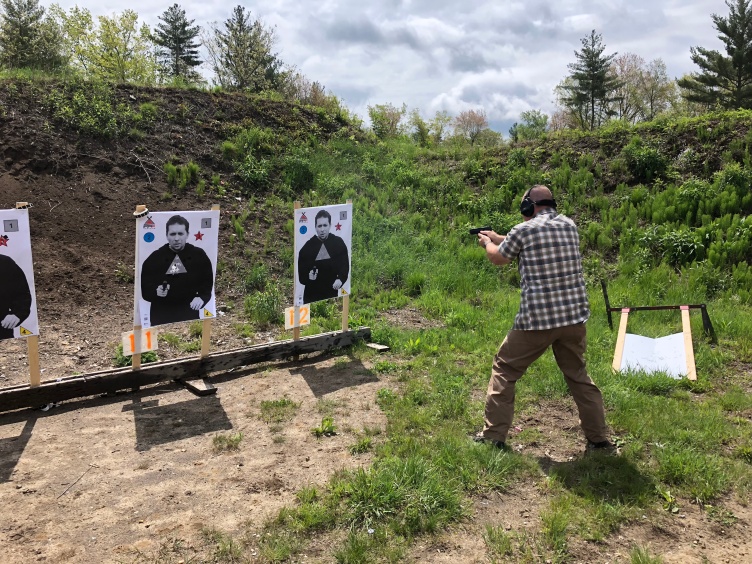 Our practice with MUC from the day before really began to make sense as we were at times allowed to choose the appropriate level of force to deploy, whether that was verbal, less than lethal, or lethal. I have always heard that people are not likely to drop whatever they may be holding in their support hand when drawing and shooting, and true to form, the first time I had to transition from pepper spray to the gun, I shot one handed with my pepper spray retained in my support hand. Only with conscious thought did I drop the pepper spray and get a full two handed grip on the gun for the next iteration.

We shot some drills that were unique and quite innovative at times, with several that I had never seen before or at least never actually had the opportunity to practice. These mostly took up the afternoon, and required a level of trust between participants that had been fostered throughout the day. I would really like to take Murphy’s team tactics class at some point, as we touched on some of the relevant concepts during specific drills. In short, we practiced several potential conflict scenarios where gunplay might be required. 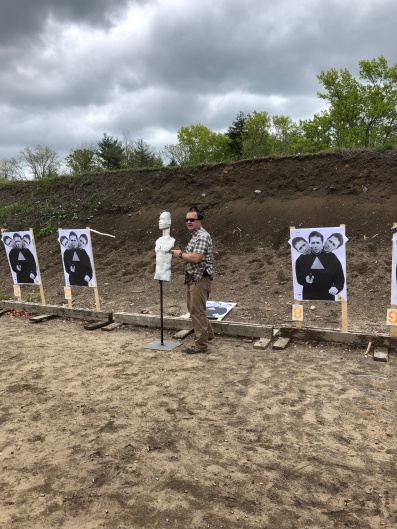 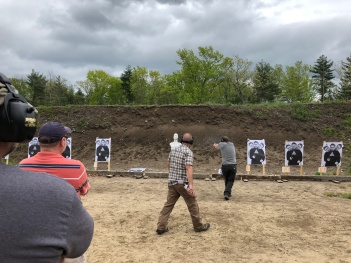 After a final individual evolution where one might have to use pepper spray or not, shoot or not, or even apply a tourniquet or pressure dressing or not, we shot a 50 round qualification. Murphy documented our results in case such evidence might be needed for future use of force litigation. The final shots of the day were left up to each individual student. We lined up and were given the opportunity to shoot a magazine or two working on whatever we chose. I simply did a few failure drills and emptied a couple of magazines.

Murphy uses the word “advanced” in the class title, and experience with basic marksmanship along with the concealed draw stroke are listed in the class prerequisites. I agree, as this is not really a class for beginners with no prior training. Without the fundamentals in place, I think the task loading introduced in this class would be a bit too much. Having said that, one novice kept up and shot well under Murphy’s watchful tutelage. This is also the type of class where having the wrong gear will quickly become apparent, as at least one student discovered.

For my part, I used my Boresight G19 carried in an old standby, a Fricke Archangel AIWB holster. I shot a mixture of leftover Fiocchi and PPU FMJ ammunition, and my round count at the end of the day was right around 400 if my math is right. I actually thought we shot a bit more, but that’s what my count was based on empty ammo boxes.

After we had finished shooting and cleaning up the range, Murphy held a final sermon and Q&A opportunity, and stressed that his class curriculum is constantly evolving. The class I took may not be the same class offered a year from now, and if it changes, I trust Murphy will only make it better. I will definitely train with him again, whether it is down in Virginia or up in New Hampshire. His “Concealed Carry: Advanced Skills and Tactics” class is currently scheduled in Texas, Iowa, and Georgia for the remainder of 2018. If you’re within striking distance, I definitely think this is a course worth taking. If you happen to live within driving distance of his home range in northern Virginia, as does Robert, then consider yourself truly fortunate.

In the interest of full disclosure, I did not have to pay for this class, although I did have to pay a range fee, ammo, lodging, and other travel expenses. I would hope that I have some credibility with our readers by now in that I will give my honest opinion in reviews, whether good or bad. John Murphy is not without his detractors, but in my experience and opinion, he is a knowledgeable and innovative teacher and an honorable man. I recommend you train with him if you’re serious about carrying a gun.