Earlier this year in January, I was excited to see MagPul bring a restricted capacity Glock magazine to market for those of us that live behind enemy lines. I immediately ordered three of the MagPul PMAG 10 GL9-G19 magazines. Over the past six months, I have put well over a case worth’s of ammunition from various manufacturers through my Glocks using the magazines in classes, in a recent competition, and during weekly range visits. While I haven’t abused them, I have definitely run them hard. They have never failed to drop free, and I’ve repeatedly dropped them onto the gravel at the ranges I use. In fact, I have yet to experience even so much as a hiccup from the magazines. Based on my experience so far, I am seriously considering switching to them for carry (duty) purposes.

I like these magazines for a number of reasons.

I do have a couple of minor issues with the magazines. Nothing is perfect. I have found that it is very difficult to load 10 rounds into the magazines without using a loading device to press down on the rounds. I just use the Glock version that ships with the pistols. (Some high volume users have reported that the magazine springs relax somewhat with use… mine haven’t yet.) Conversely, I can easily load an OEM magazine fully without any mechanical adjuncts. Also, OEM magazines have witness holes for almost every round. The MagPul magazines only have one witness hole that simply shows when the magazine is full. A couple more witness holes would enhance the design in my opinion. 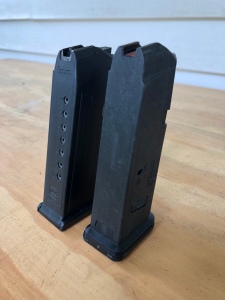 Those minor complaints aside, I think MagPul has again answered a distinct need in the marketplace with a well designed product. The MagPul 10 round magazines are everything that I hoped they would be, and stand head and shoulders above other aftermarket restricted capacity magazines that I’ve tried. If you live in a state with draconian magazine capacity laws, these magazines are a good option.

I also want to briefly comment on the regular capacity MagPul Glock magazines. I used three such brand new magazines recently in an out of state class, and while overall I was pleased with them, I did have one particular magazine that caused me repeated malfunctions when the follower hung up inside the magazine body on the first day of class. I disassembled the magazine that night and wiped it out, and didn’t have any further issues on the second day of class. I don’t know whether dust and debris from the range caused the follower to bind up or whether there may have been an internal burr that caused the problem, but nonetheless, it happened. Fortunately, I’ve experienced no such issues with the limited capacity magazines that I have. I bring this up to highlight the fact that problems can occur even with the best gear, and that it’s wise to vet your gear in training before relying on it for real. Mark and keep track of your mags, and if one is causing repeated problems, relegate it to training or toss it in the trash.

Thanks for reading, and if you’re not already, follow us here at the blog or on our social media. As always, we welcome questions and comments.