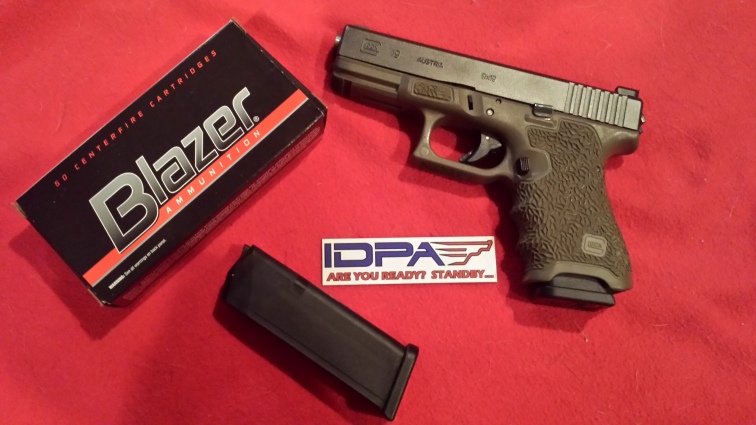 One of my goals this year was to shoot in at least seven matches.  However, with a pair of graduate classes during late winter/early spring along with all the usual familial obligations, I was not able to get to a match until this past weekend.  We shall see if my goal is jeopardized down the road.

I chose to shoot this match in the Compact Carry Pistol (CCP) division, the division in which I have been shooting the most.  I used my OD Third Generation Glock 19, modified as per this article and now equipped with a KKM barrel (not sure if this barrel is, in fact, more accurate, or if it’s just a placebo effect, but for now I’m going with it!).  This pistol is equipped with Ameriglo I Dot Pro sights and a Vickers/Tango Down slide stop lever.  I also recently added a Tau Development Group Striker Control Device.  I used Glock factory 10 and 15 round magazines and used Blazer Aluminum 124 grain FMJ ammunition.  I used a Wilderness Instructor belt, a Bravo Concealment BCA OWB holster, and my no-name two magazine kydex magazine carrier.

The match consisted of seven total stages.  There were 28 participants overall, 5 (including me) in CCP.  Weather was cool (mid-60s) and mostly cloudy with some sun peeking out.

Stage One was set up in all three pistol bays and would be the same Stage One for everyone.  As seems to happen often for me, I was tagged to go first on Stage One.  Unfortunately, there was some disagreement or controversy about how to shoot this first stage, so I ended up doing it once AND THEN someone came by our squad and said, “No, you have to do it this other way”, so I had to do it again.  This annoyed me a bit, because I shot it (the first time) really well, and of course screwed it up a bit the second time.  In essence, this was a F.A.S.T., but shot on an IDPA target and shot a second time strong-hand only.  I finished this stage 12th overall, 3rd in CCP.

Stage Two had us shooting through a firing port cut in some of that USPSA-style orange “fencing”.  We were mimicking shooting from a position at the front of a prisoner transfer bus at some bad guys in the back of the bus, a la “The Fugitive”.  The six targets were in three arrays, distance-wise, and were sprinkled with some no-shoot targets (other guards?).  Each of the six targets had to be hit three times.  I finished this stage 13th overall, 1st in CCP.

This stage required a quick sprint with a bucket in one hand (that inexplicably had our spare magazines inside of it), shooting two targets strong-hand only.  We then had to maneuver around a “structure” engaging 6 other targets as we saw them.  Each of the 8 targets had to be shot twice each, but to access one target we had to activate it by hitting a steel target, so we had to shoot at least 17 rounds total.  Here, I was out of IDPA practice a bit and suffered a three second procedural penalty for shooting two of the targets out of sequence.  I also experienced a failure to fire with one round at the mid-point of a magazine; a quick tap-rack cured that.  I did not find the ejected round on the ground afterwards in order to check for a primer strike.  As I experienced no more issues for the rest of the match, I assume it was just a bad round.  I finished this stage 16th overall, 3rd in CCP.

Stage Four required the most running around, with a quick couple of steps needed to engage three of the targets from one position, and then moving down a “hall” or other structure, engaging the rest of the (9 total) targets along the way with two shots each.  This was a fun stage.  I finished this stage 10th overall, 2nd in CCP.

Stage Five was the only limited stage of the match, firing from standing, kneeling, and prone positions behind a VTAC barricade at three targets downrange.  Each target had to be engaged with two rounds from each of the three firing positions, so 18 total rounds would be fired.  I have at times in the past screwed up the VTAC barricade, but this time I handled it well, finishing this stage 7th overall and 1st in CCP.

Stage Six was the Bill Wilson 5×5, also used as the short IDPA Classifier.  This is set up as one stage in most of the matches I attend.  I shot well overall but screwed up the head shot, rushing it and dropping it into the chest zone with a five second penalty.  Oh well.  My time with points down was 27.55, just outside “Expert” for CCP. Such is life.  I finished this stage 7th overall, 2nd in CCP.

Stage Seven was shot entirely from the prone after a “bicycle crash”.  I wish we could have done the crash for real, because when I used to mountain bike regularly, I got pretty good at them (“if you’re not crashing, you’re not trying!”).  We had to engage three “dogs” with three shots each, then shoot a piece of steel that would activate a drop target, which had to be shot with at least three rounds as well.  I finished this stage 3rd overall, 2nd in CCP.

I finished the match 8th overall and 1st in CCP.  I fired a total of 141 rounds during the match, plus the one failure to fire.

This match was challenging but a lot of fun.  Despite a couple of errors here and there (the procedural error and the dropped head shot being the two most obvious examples), I feel like, for my first match of the year, I did pretty well.  I felt like I was confirming my sights just a little too much on some shots that did not require a lot of precision, and also could have done some better planning on at least two stages.  However, some positives were my prone shooting on both the “bike crash” and VTAC barricade stages, no “no-shoot” targets hit (even though there were a lot at this match), and I also handled my reloads pretty well.  I should note that it is hard for someone shooting CCP to keep up with SSP folks in many stages, as any stage that requires more than 17 rounds means that a second reload is necessary for the CCP folks (loaded with 9 and reloads with 8 rounds in each magazine).  Considering this handicap, I thought I did well.  Indeed, all of those who finished higher than me (with one exception, a CDP competitor) were shooting in SSP or ESP divisions, both of which allow 10 round magazines.  Finishing first in CCP was nice!

One observation I made was the struggle many of my squad mates had shooting from the prone.  For example, some right-handed shooters chose to lie on their left side to shoot during both of the stages that required prone shots.  This not only destabilized their shooting arm, but also covered their reloads on the left side of their belts.  Some of the older/less-nimble guys also had some issues getting into and out of such positions.  Though I am starting to feel my age, I do not yet require a winch to stand up from the prone.

My apologies for not taking more photos of the stages.  The setup for some of the stages was rather complicated, and we were still setting up in my starting bay when the safety brief was starting.  Thus, I did not have any spare time to take photos before the match got underway.

As always, thanks for reading.  Feel free to post comments or questions below or on our Facebook page, as we always welcome civil discourse.