How sad is it that it took me all the way until the last weekend in September to shoot my second match of the year?  That’s how it goes sometimes.  (See description of my first match of the year here.)  Family illnesses, family vacations, scheduling conflicts with classes I took, etc., all conspired against me this year.  Hopefully I can get a couple more matches in before year’s end.

This particular match was a two-day match.  As such, participants could choose to shoot the match on one day, the other day, or as separate entries on both days (some do this and shoot in one division on one day and another division on the second day).  An unusual feature of this match was that the seven stages were set up to mimic as closely as possible—given constraints of the physical layout of the range—a Tier Three match going on that same weekend in which some regulars at this club would likely attend.  Thus, they could use this match as a bit of a warm-up for the larger match a few hours’ drive away.  In all, 50 participants shot this match for score.

No real surprises from me here.  I brought my OD Gen 3 Glock 19 and would shoot in the Concealed Carry Pistol (CCP) division.  The pistol is set up as per this article and is equipped with Ameriglo I Dot Pro sights.  I used factory 10 and 15 round magazines, though shooting in CCP required that they be loaded with no more than 8 rounds each.  I used a Bravo Concealment outside the waistband holster, my no-name two magazine kydex magazine carrier, Wilderness Instructor belt, and used Blazer Aluminum 115 grain ammunition.

As noted above, the match consisted of seven stages.  The first stage was set up in all three pistol bays at the range and would be shot by everyone first as a “warm-up” stage (“warm-up” is a debatable term, as it is still for score!).  I will note here that only five of the participants shot in the CCP division. 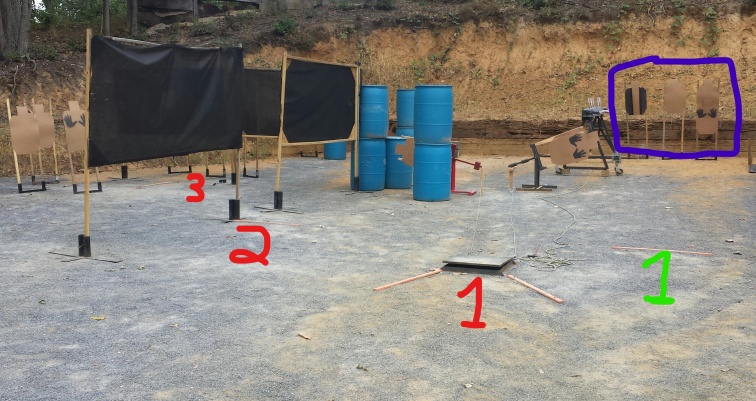 The so-called warm-up stage consisted of three targets arrayed close together (a yard between each) that had to be shot with two shots each (see blue outline in photo above).  The left target was a “tuxedo” target (hard cover on both sides in the form of black bars painted on the target, which make the target look like it’s wearing a black tux).  The middle target was just a standard IDPA target.  The right-most target was a standard target partially masked from beneath by a no-shoot target.  No big deal.  Except we would be shooting these three targets from 20 yards (a few yards back from where the above photo was taken)!  My mediocre score would have been even worst except one of my errant shots hit one of the targets in the down-zero portion of the head, saving me some points!  I finished this stage 20th out of 50 overall, 3rd out of 5 in CCP.

The second stage was fairly basic.  A plate rack (6 plates) and a steel IDPA target with the down-zero in the center cut out.  We had to knock down each plate and then put two rounds through the empty down-zero target, all from ten yards (the green #1 on the photo above….plate rack is rolled to the side in this photo).  I fired at least two extra rounds at the plates, costing me time, and then hit outside the empty circle with two rounds (ding ding!) before putting two through the center.  Because of my errant shots, I had to perform a reload, further slowing me down.  In short, I struggled a bit.  I finished this stage 29th out of 50 overall, 3rd out of 5 in CCP.  No excuses.

This was the first stage that required the shooter to do some moving, and was also the first stage that had moving targets (two).  On the buzzer, the shooter had to stomp an activation plate (red #1 above) that started two swingers (one of which had a no shoot swinger in front of it), engage both along with a more distant target, then move to a second position (red #2) and engage four more targets with no-shoots mixed among them, then finally maneuver to a “window” (red #3, though the window is hidden from this vantage point) and engage a few more targets along with two falling-steel targets.  I struggled with accuracy a bit during this stage, with 3 hits on various targets in the down-one zones.  I could tell I was struggling and so tried some make-up shots, which resulted in me needing to make a second reload, costing me extra time.   I completed this stage 15th out of 50 overall, 4th out of 5 in CCP.

The fourth stage was one I liked the look of right from the get-go, requiring the shooter to retrieve his firearm from a table and engage several targets, then maneuver to a second firing point to engage a few more (including a falling steel target that, in turn, activated a mover), and finally shoot two more targets well concealed behind some barrels for cover.  One of the targets at the second firing point required a head shot (the rest of the target was behind a barrel).  I finished this stage 9th out of 50 overall, 2nd out of 5 in CCP.

The fifth stage had us playing the role of bartender, with a bottle in one hand and a “glass” in the other.  After dropping these props and drawing, we would have to engage a series of targets around the bar with two shots each.  There were no movers on this stage.  I missed one shot into the down-one of one target and was just a little slow, finishing 19th out of 50 overall, 4th out of 5 in CCP.

The sixth stage required the shooter to be seated at a table facing uprange, then turn, stand, draw and shoot at several targets downrange, including a falling steel target that raised a pair of cardboard targets.  There were several no-shoot targets mixed in with the rest.  I lost one round out of the down-zero zone of one target, and finished this stage 18th out of 50 overall, 2nd out of 5 in CCP.

The final stage involved hand-dropping a steel target at the buzzer in order to activate a moving target.  After the mover and another standing target were engaged (distance was probably 12-15 yards), the shooter had to move around a blind and engage several more stationary targets.  My accuracy on these difficult targets helped me here (just a one second penalty), finishing this stage 11th out of 50 overall, 2nd out of 5 in CCP.

The Good—I only lost 6 seconds due to hits outside the down-zero zones of targets over the entire match.  I also, for a change, did not hit any of the many no-shoot targets, nor suffer any procedural errors.  For my first match in quite some time, I was pleased to finish in my “usual” top 30% overall.  Considering some of the additional reloads I had to perform versus those shooting SSP, I thought this was pretty good.

The Bad—I was a little slow all day, overconfirming some sight pictures, and I was particularly displeased with my performance on the plate rack during Stage Two.

It was good to get back into it.  I was a little disappointed there was no “5×5 Classifier” stage, but I really did like the stages that were set up for this match.  The movers were challenging, there was a fair amount of movement involved, and starting with the “warm-up” all the way to the end, the accuracy standard was pretty high.  Although I started this year with the goal of shooting in seven matches, at this point I will be happy to make it to two more, with three or more a bonus in my mind.

As always, thanks for reading.  If you have any questions or comments, please share below or on our Facebook page, as we always welcome civil discourse.