After only shooting in four matches in 2019, I was excited to have the opportunity to shoot in my first IDPA match of 2020 just a few days into the new year.  Hopefully, this is a harbinger of things to come.

The match was a little bit unusual in that it consisted of only four IDPA stages (matches I attend are usually six or seven stages).  Further differentiation between this and most matches was that there were two additional stages based off of Bianchi Cup matches.  These were scored separately from the rest of the match.  Thus, this was really two matches in one.  The match cost $20.

Nothing new here.  I brought my OD Gen 3 Glock 19 and would shoot in the Concealed Carry Pistol (CCP) division.  The pistol is set up as per this article and is equipped with Ameriglo I Dot Pro sights.  I used factory 10 and 15 round magazines, though shooting in CCP would require that they be loaded with no more than 8 rounds each.  I used a Bravo Concealment outside the waistband holster, my no-name two magazine kydex magazine carrier, Wilderness Instructor belt, and used Blazer Brass 115 grain ammunition.  I would end up shooting a total of 111 rounds across both matches.

I had the pleasure of shooting first on this stage.  The shooter would begin seated with his pistol on the table underneath a sheet of cardboard, with spare magazines on the table.  On the buzzer, we had to retrieve the pistol, stand, and engage the six targets with two shots each.  The three in the closer array had to be hit with head shots (these were no more than 3 yards away), and then the targets at about 10 yards away with hits wherever we could get them.  I had a little trouble seeing around/between the array of targets and “friendly” targets in my foreground, which slowed me down to get the targets further back.  I got my hits (no points down), but only finished this stage 10th of 29 overall, 5th out of 8 in CCP.  I just lost too much time finding my lanes.

The second stage was shot around a TON of blue barrels.  In total there were seven targets around and behind the wall of barrels.  Each target had to be shot twice each.  A few had “hard cover” markings on them, and there were at least two “no-shoot” targets sprinkled among the “bad guys”.  I again got all of my hits and finished this stage 8th out of 29 overall, 5th out of 8 in CCP. 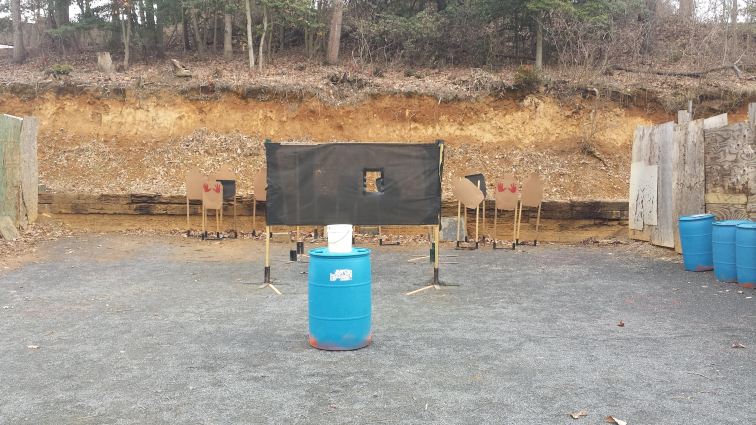 The third stage would be an unusual one.  We had to have our support-side wrist handcuffed to a briefcase.  We could use that hand/arm if we so chose, but had to understand how we might be handicapping ourselves if we chose to do so.  We also violated IDPA rules for this stage by changing—from one shooter to the next–the positioning of several “no-shoot” targets among the other targets.  On the signal, we would have to engage two targets within the “room” in which we started with two headshots each (“hard cover” covered the rest of the targets……distance was no more than 3 yards), then engage three targets outside each side of the “room”.  With the “no-shoot” targets mixed in, we had to be careful of rounds going through our targets and hitting “no-shoot” targets beyond.  In addition, performing a fast reload with a briefcase handcuffed to one hand was not easy.  I had one hit among all the targets in the “down one” zone of a target and finished this stage 13th out of 29 overall, 6th out of 8 in CCP.

The fourth stage would be shot on the same target array.  This time, the shooter would be shooting from outside the room, engaging targets to both sides and through the “window” for those same headshots.   Here I got two hits in “down one” zones of two targets and finished this stage 11th of 29 overall, 3rd of 8 in CCP

I finished the match 10th of 29 overall, 5th of 8 in CCP.  I must say that I left the match feeling like I had an “average” performance, probably middle-of-the-pack, and my estimate was not far off.  However, when I got home and checked Practiscore, it had me listed as 6th overall, 3rd in CCP, which had me pretty excited.  I am not sure what happened, but somehow the scores changed a few days later.  Though disappointing, this is about how I felt I performed, so I am not really surprised.  I have just never seen any scores “change” before.

One other note is that I had the fewest points down of anyone shooting in CCP.  While proud of my accuracy, this also tells me that I was too slow, as other shooters with significantly more points down beat me easily.

This stage was shot on a standard plate rack and consisted of a total of four strings of six rounds each.  We would shoot the plate rack twice from 10 yards (had to do so in six seconds) and then twice again from 15 yards (had to do it in seven seconds).  This was a limited stage and so if you missed a plate you just moved on to the next one.  I shot my two strings from 10 yards clean but left a few plates up on both strings from 15 yards.  What I found was that it was too easy after just shooting them at 10 yards to shoot at the same cadence at 15 yards, and that extra second was LOOOONNNNGGGG.  I should have shot more slowly.  I finished this stage 10th overall out of 29, 4th out of 8 in CCP. 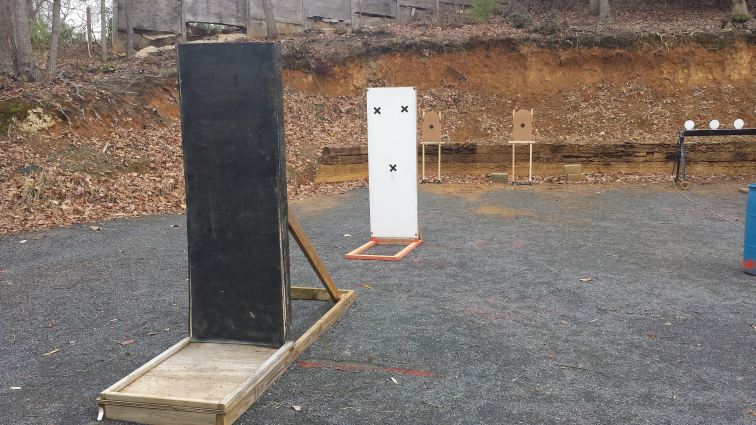 The final stage was shot on two Bianchi “Tombstone” targets, and again consisted of four strings.  The first two would be shot from either side of the first barricade (about 10 yards away, although I want to say it was an odd distance like 35 feet).  Six rounds from one side of the barricade at one target.  Reload off the clock, and the same from the other side.  Then we would move to the second barricade (at 15 yards) and do the same.  We had only five seconds to shoot each string from the first barricade and six from the second barricade.  I finished this stage 9th of 29 overall, 4th of 8 in CCP.

I finished this mini-match 9th overall, 4th of 8 in CCP.

Though an unusual match, I appreciated the novelty of it.  While I was a little disappointed in my performance, I must confess that when I looked at who had registered for this match, I knew I would not be finishing in the top five (too many good shooters).  I was also a little surprised by the number of participants shooting in the CCP division; typically there are only 3-5 per match.

As always, thanks for reading.  If you have any questions or comments, please post them below or on our Facebook page.  We always welcome civil discourse.