As in years past, this past weekend I was able to attend the opening day of the NRA Great American Outdoor Show held at the Pennsylvania Farm Show Complex in Harrisburg, PA. We made it an overnight trip this year, a much easier proposition than leaving at 0300 and getting back near midnight. I know that a few bloggers had advocated boycotting the show this year as a protest against the NRA due to the recent controversies, but there were things at the show that I wanted to see and do.

I’m not sure whether this is reality or simply my perception, but every year it seems as though there are less exhibitors in the Shooting Sports Hall, but there is still much to see for the firearms enthusiast. As I typically do, I’m going to give a brief rundown of the things that caught my eye.

First up, the Mossberg MC1sc and the new MC2c. I don’t have much use for the cross bolt safety models, but the pistols were comfortable to hold and the flat faced triggers broke relatively crisply as far as striker fired pistols go. The models with night sights were the most appealing to me. I have no intention of buying one, but I do think they’re good entries into the compact pistol market.

Next I was able to take a close look at a Remington V3 Tac-13. Such a design screams for a Form 1 and stock, but if I were going to undertake such a project, I would probably use a similar option from Black Aces Tactical that costs half as much. Without a stock, I’m not quite sold on the utility of such a weapon.

While Colt did have a rather large display at the show, I did not fight the crowds to examine the new Python. I wouldn’t mind having one in the safe, but they are a bit outside of my budget for what would essentially be a range toy. My interests in revolvers tend to gravitate toward smaller snub nosed examples anyway.

I briefly looked at the Tactical Life Firearms takedown ARs. Being able to retrofit one of my existing carbines with such a system is intriguing, but I would have a lot of questions before I undertook such a project. For now, my SBR with folding stock adapter does everything I need it to in that role.

Speaking of the AR-15 and it’s innumerable variants, anyone that doubts that the AR is currently America’s rifle has never walked the exhibit halls at the Great American Outdoor Show. Countless manufacturers and vendors line the aisles and booths with AR variants and accessories satisfying virtually any conceivable need for the carbine. Alas, given the draconian legal restrictions I live under, much of it is of limited interest to me by virtue of legal fiat.

Continuing on the above theme, I took a moment to look at the new MagPul BSL and BTR arm braces for AR pistols. The innovative design almost makes me want to invest in a CT legal “other” firearm. MagPul has made mounting a sling to the brace easy, and the design is elegantly simple like most MagPul offerings.

I’m interested in trying out some reactive targets that I saw at the show. They are made of self-healing polymer and reportedly able to withstand many thousands of rounds. Check out Newbold Targets if you’re in the market for an inexpensive alternative to steel.

I was disappointed that the Sig display did not include the new P210 Carry. I’ve heard about the P210 for years, but I don’t believe I’ve ever actually seen or held one. Oh, well…

Although initially a bit put off by the advertisements for male erectile dysfunction medications, I did pick up a pamphlet from The Sportsman’s Doctor display. In addition to the above mentioned pharmaceuticals, he apparently also sells various kits tailored to specific outdoor pursuits. The fact that the kits contain contextually specific antibiotics and other prescription medications is what caught my interest. I could see ordering such a kit prior to a hunting trip or other adventure travel.

Among all the examples of furniture and home accessories designed to conceal a firearm, Freedom Frames, LLC stood out. Basically, they manufacture picture frames that conceal a pistol. The hidden compartment is virtually undetectable unless you know the secret and therein lies its security. Unless children or guests are shown how to open it, inadvertent access to the concealed firearm is quite unlikely.

The suppressor playing field is rather crowded these days, but I did take note of the Banish 30 shown at the Silencer Central booth. The Banish 30 is a direct thread multi-caliber modular can that is quite lightweight in the hand. I don’t have a .30 caliber host at the moment, but if I did, I would certainly consider the Banish 30, especially given the eZ-Pay Plan that Silencer Central offers.

I did take advantage of a deal I couldn’t pass up and purchased a Streamlight TL Racker shotgun forend weapon light for my Remington 870P SBS. I was able to manipulate an example mounted on a blue gun and found that I could reach the activation controls relatively easily both with the gun mounted and with it held in the CQB position that I learned from Rob Haught. I bought the older 850 lumen model on close-out instead of the new 1000 lumen model, but I doubt I could have found a better price and for my purposes, the 150 lumen difference is not a deal breaker. I’ll report back after I have some more experience using it.

I also bought an inexpensive Ruger LCR Training Gun at the Cold Steel display. Now I have a viable training aid if I ever want to practice gun grappling with a snub revolver. I would have preferred a J Frame analog, but I do have both real guns and it’s close enough for the price I paid. 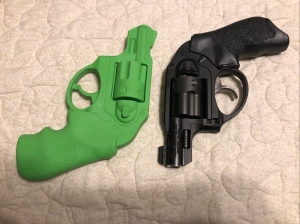 Based on a recent recommendation from Paul Howe’s CSAT Newsletter, I stopped at the Lucas Gun Oil booth and purchased some gun oil and gun cleaner. I’m relatively agnostic about gun lubricants and cleaners, but I trust what Paul Howe says. If he’s had good experience with it, that’s good enough for me.

I also finally took action on a project that I first wrote about more than a year ago. Taking advantage of a special show discount, I ordered a Boyd’s stock for my Browning A-Bolt II Stainless Stalker. The new stock has an identical length of pull to my newer Browning AB3 Micro Stalker and will make the two rifles virtually identical in terms of handling characteristics. With luck, I will have opportunity to use the rifle with the new stock on an upcoming wild boar hunt this April. While at the show, my friends and I booked a hunt at the Spartan Hunting Preserve in my home state of TN. I may yet use my Marlin .30-30 for that hunt, but the .30-06 will be along for the ride either way.

Finally, my wife chose an inexpensive pair of stylish hoop earrings crafted from spent cartridges. The Speer 9mm markings are virtually invisible without close inspection, and I think it’s hysterical that she could wear them among even the most anti-gun crowd and most likely no one would be the wiser. Check out Small Town Gems Bullet Jewelry if you’re in the market for some unique jewelry. Apparently they will also do custom work with your own spent casings if you want to celebrate a special occasion with a special momento.

If nothing else, visiting the show is a good workout. I logged over 11,000 steps walking through the various exhibit halls. The six hours we spent there doesn’t really do the show justice. One year, I may actually stay for two days, as there are things that caught my eye that I simply didn’t have time to look at. Although there wasn’t much that really interested my wife on what was her first visit to the show, it is nonetheless a viable family excursion. There are a variety of activities available for children ranging from fishing to an Eddie Eagle themed play area. Hershey, PA is not far away, and there is a lot to do there as well.

The 2020 show runs through February 9. Adult tickets are only $15 and it makes for a fun day or weekend. If you’re able, I suggest attending. For me, the show serves as an annual reminder that some of the values that I cherish are still alive and well. And just to bolster the fact that guns aren’t the problem, consider that despite the lack of metal detectors and bag screening at the entrances, to date there have been no blood baths in a venue that welcomes the armed American.

As always, we welcome comments, questions, and civil discourse. If you’re not already, please follow our work here on the blog either by email or on social media. If you shop online at Amazon, please consider using our Amazon Affiliate link. Doing so benefits us at no extra cost to you, and we appreciate the support!