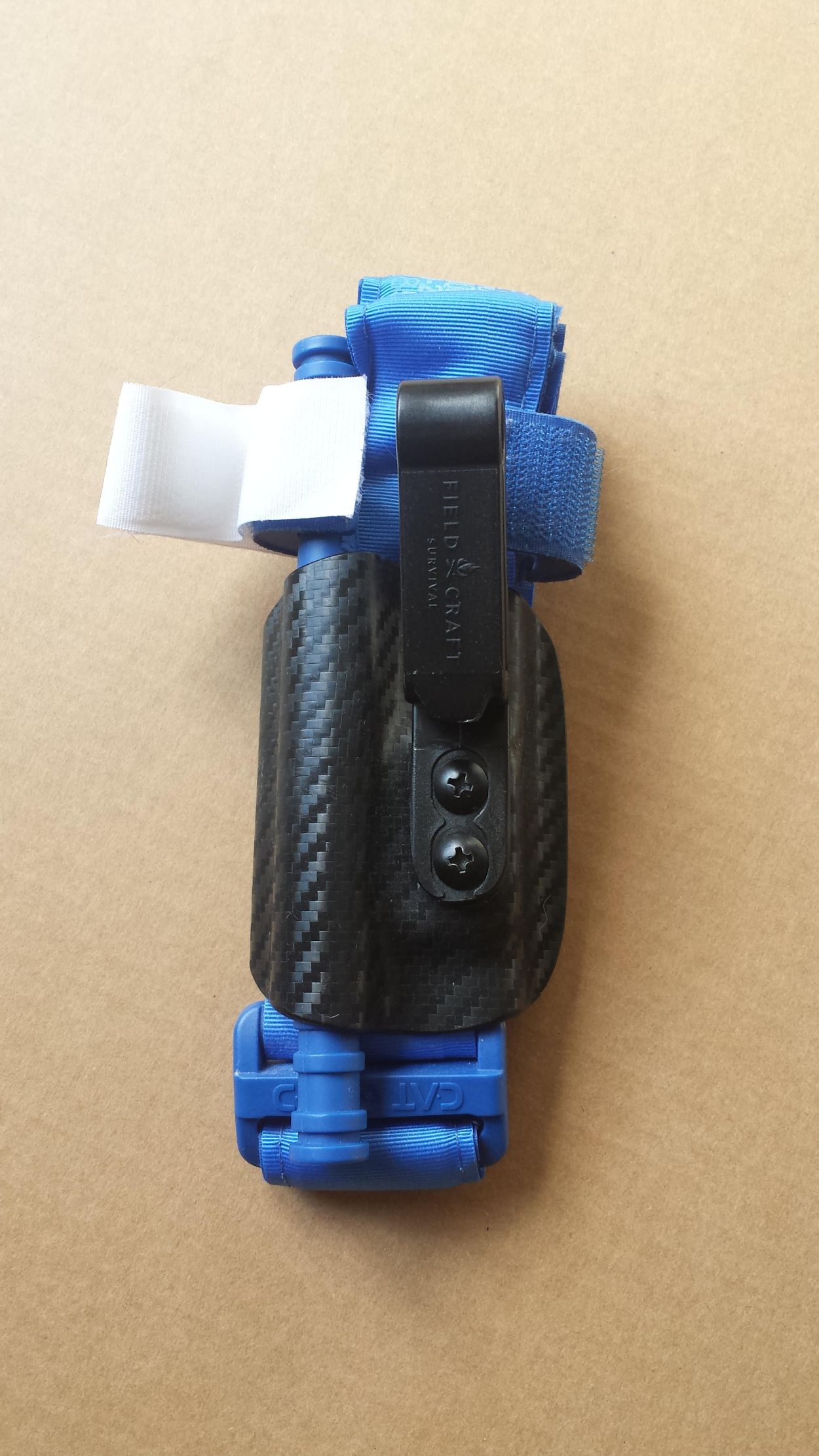 Both John and I are wont to carry a purpose-made tourniquet on our bodies as often as possible.  We both recognize the likelihood of needing medical gear is probably higher than needing our concealed pistol, and we also are aware of the efficacy of two tourniquets in particular:  the North American Rescue Combat Application Tourniquet (CAT) and the Tactical Medical Solutions SOF Tactical Tourniquet Wide (SOFTT-W).  Until last year, these were the only two that were TCCC approved, and both have been through a few generations of improvements over the years.

Of course, me being me, I prefer to carry more medical gear than just a tourniquet.  So it was that I started utilizing an ankle cargo cuff to hold a SOFTT-W, Israeli pressure bandage, duct tape, gloves, Combat Gauze, etc.  However, I live in a temperate area where I am likely to wear shorts in the summer.  This would preclude my use of an ankle kit on those shorts-wearing occasions and had me searching for other solutions to carry my medical gear.

The first solution was to purchase the Phlster Pocket Emergency Wallet (PEW), which I did in 2017 right after it was introduced.  Basically just an elastic sleeve, the pre-loaded version I purchased came with an H&H compression bandage, H&H gauze, Wound Clot gauze, and gloves.  Advertised as being no larger than a wallet, I would say that estimate is a bit optimistic (unless you’re a “Seinfeld” fan and recall George Costanza’s wallet).  Nevertheless, I found it fit nicely in the Columbia cargo shorts I typically wear in the summer months.

Of course, the PEW includes no provision for the carry of a tourniquet.  I would typically throw a flat-folded SOFTT-W in another pocket and go on my merry way.  However, this meant two pockets occupied with medical gear, and I never liked the way the metal parts on the SOFTT-W banged and rubbed against my thigh through the pocket.   Phlster offers their Flatpack Tourniquet Carrier, but to my eye, this does little but provide a way to attach the tourniquet to a belt.  My goal has been to carry a tourniquet, but to do so in a concealed manner; I would rather not have the carry of a tourniquet attract unnecessary attention to me.

There is one final consideration I made.  I chose to carry the SOFTT-W over the last few years because it folds so flat, making carry in a pocket or the ankle cuff relatively easy.   However, I find the CAT MUCH easier to apply, particularly at speed and/or one-handed.   Thus, I really wanted to find a comfortable, concealable solution to carry the CAT if at all possible.

Google to the Rescue!

I did searches online for tourniquet carriers and found quite a few designed to be worn overtly on duty belts, chest rigs, and plate carriers, but could not find anything that was easily concealable.  As noted above and in keeping with the preachings of Varg Freeborn (along with my own, independently-arrived-at beliefs), I prefer to conceal my tools, capabilities, and intentions as much as possible.  An overtly worn tourniquet is likely to generate questions about not only the tourniquet itself, but also curiosity about what else I might be carrying.  Given where I live and work, I prefer to avoid such scrutiny.

Eventually, I found my way to the Fieldcraft Survival website and their IWB kydex tourniquet holster.  The price when I ordered mine was $39.99, but as of this writing it has been on sale for a while for $24.95.  For the record, I thought $39.99 was a bit high for what it is. Then again, being (seemingly) the only game in town, I was willing to spring for it at that price.  At $24.95, it is a no-brainer, in my opinion.  The holster is of a clamshell design (i.e., open along one edge), and is molded well to accommodate the tourniquet windlass in a vertical orientation.  Though the buckle on the tourniquet is wider than the “shell” of the holster, the clamshell design enables the tourniquet holster to widen as you draw it from the top, allowing the tourniquet to be readily accessible.  I would not put a shot timer on it, but I have done many practice “draws” with it from a variety of positions (seated, standing, etc.) and never had an issue accessing the tourniquet quickly.  One note:  to those to whom such things are important, Fieldcraft Survival was started and is currently run by former Green Beret Mike Glover.  I must admit I did not realize this at the time I purchased my TQ holster, but it is nice to support an American veteran.

The holster is available in an assortment of colors.  I just went with the black carbon fiber look.  It attaches to the belt via a single G Code clip (though it carries the Fieldcraft Survival name and logo, on the reverse side it bears the G-Code name and logo).  I have long despised the G Code clips (I briefly used an Incog Glock 19 holster back in 2014 and ditched it soon thereafter primarily because of these clips).  I find that the clips, whose angle is designed to lever the gun back in toward one’s gut , actually have the opposite effect and just pull the belt out away from the body (a wedge at the muzzle end of the holster is much better at levering the grip into the gut), hindering concealment.   I had an extra Raven Concealment Systems belt clip (the type that comes on the Eidolon holster I use and is also used by JM Custom Kydex for some of their holsters), and three minutes later had my preferred clip attached.

Before the clip switch

The back side of the holster is flat and smooth and quite comfortable.  The only issue I have, comfort-wise, is the edges of the Velcro on the tourniquet itself.  I typically wear an undershirt even on the hottest days, but on a few occasions that undershirt rode up beneath my outer shirt, exposing my fair and delicate skin to the Velcro and Velcro edges, which I found irritating.

I wear this tourniquet holster at the 12 o’clock position (i.e., right next to my AIWB handgun, which is positioned around what I would call 1 o’clock).  I had played around with carrying a spare magazine in that spot but could never get comfortable with that setup, and so continue to carry my spare magazine(s) at around 9 o’clock (though I have recently been experimenting with one worn on the other side of the tourniquet, around 11 o’clock).

I have truly worn this EVERY day since I purchased it in November of 2018 (except for a few days at the beach), and, other than the belt clip, I have no complaints about this item whatsoever.  Although I wish I had gotten it at the current sale price, I still feel like it has been one of the better items of EDC kit I have purchased over the years.  I wear it concealed every day at work, and no one has ever mentioned a bulge or anything visible under my shirt.  Keep in mind, that at my work, I am constantly in the front of my classroom under the watchful eye of students and staff, so if anything was amiss, SOMEONE would have mentioned it by now.

I should mention that it can take some time to set up the CAT properly to get it inside the TQ holster.  I had actually forgotten how much of a bear that can be until I tried setting up my blue training TQ for the photos included in this article.  A little trial and error is all it really takes.  Also, at first, it will seem as though the TQ holster will never “close” at the open end with the TQ inside, but wearing it for a day compacts the TQ down nicely to the amount that you see in the photos here.

I cannot recommend this simple piece of kit enough.  It seems robustly made, is comfortable, and keeps a tourniquet on me at all times.  I have found myself wearing my ankle medical kit less and less (sometimes I wear the ankle kit AND this, giving me two tourniquets on my person), whereas other times I wear this TQ holster and then the PEW in my left cargo pocket (which is the only real option when I wear shorts).

I will add here, if it was not already obvious, that I paid full price for this tourniquet holster and am not in any way affiliated with Fieldcraft Survival except as a satisfied customer.  As always, thanks for reading.  If you have any questions or comments, please post them below or on our Facebook page, as we always welcome civil discourse.  I can be reached privately at civiliangunfighter.robert@gmail.com.