In keeping with my post last week outlining a trip to the range, this week I thought I would post the results of my latest range session.  As readers of this blog are probably by now aware, I am a huge fan of the writings of Claude Werner, “The Tactical Professor”.  I find all of his articles thought-provoking, as he often delves, with statistical analysis and other thoughts, into areas that few others would even look at, let alone attempt to draw conclusions from.  On occasion, he posts what he seems to consider basic competencies one should be able to achieve with a pistol.  I have attempted some of them in the past (see here), and still visit his 5^5 drill regularly as a great benchmark for myself to see how well I shoot each of the pistols upon which I rely.

In a growing series of articles on “standards” (Claude has also recently discussed standards in a Ballistic Radio podcast), Claude outlined the NRA “Basics of Pistol Course”, which includes 3 “levels” as well as an instructor “standard”.  He shot these tests with several different handguns, and suggested that if a person cannot pass the “blue” level, he or she should probably seek out some training.  Since, as of this writing, I have completed over 160 hours of handgun/handgun-related training, I figured I would try it out.  As luck would have it, I mentioned to John my intention to try out this test, and he told me he was intending to do the same test this week as well!  So, within the next couple of days, you will get to see how John performed.

The Course of Fire

The Red, White, and Blue levels are all identical except for the distances at which they are shot.  Each level features 4 circles, each 4 inches in diameter, ringed in the corresponding color (4 red circles for the Red level, 4 white for the White level, etc.).  Each circle is shot with 5 rounds, for a total of 20 rounds per level.  Each level is shot two-handed, standing, but otherwise unsupported (no leaning against anything), and there are no time limits.  I should note here, as Claude did in his article, that, when you use the PDF (see the bottom of Claude’s article) to print the targets on 8 ½ x 11 inch paper, the circles come out a little small, so a hit just outside the circles can still be counted.  See here: 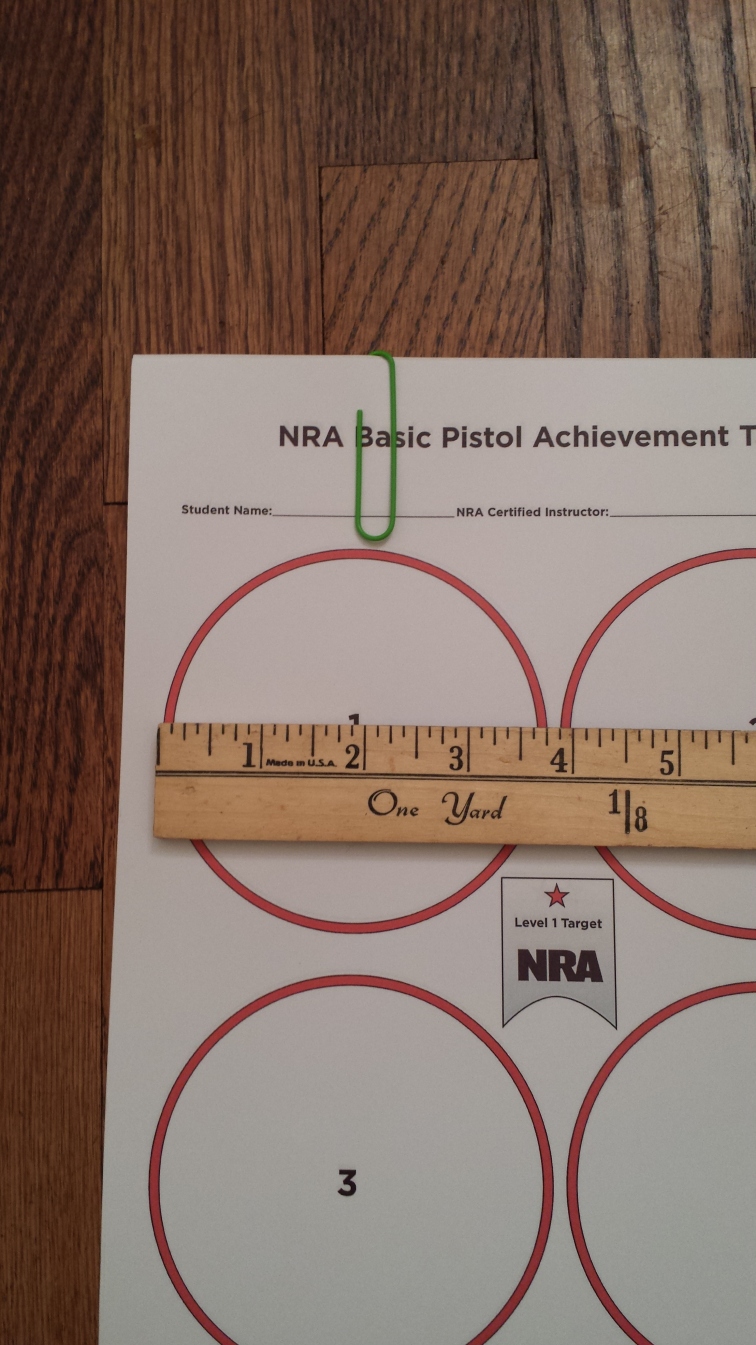 I chose to shoot the full course of fire with my Glock 19.  It is equipped with Ameriglo I Dot Pro sights and a Glock factory smooth-faced Glock 17 trigger.  I used Freedom Munitions 124 grain round nose ammunition (new, not remanufactured).

The Red level is shot from a distance of 10 feet.  As you can see in the photo below, this was not a super-challenging drill, and most of my hits were touching each other (though a little left of center, which I am not pleased with).

The White level is shot from a distance of 15 feet.  Again, not much of a challenge (note on circle #3 I actually fired 6 rounds…I had a malfunction and lost track of my rounds fired).

The Blue level is shot from a distance of 20 feet.  I had one clip the line on circle #1, but overall even this level required just a bit of focus.

In Claude’s article, he suggests that those who can succeed at the Blue level try the Instructor level, which features an 8 inch circle on a grid pattern.  The goal is to fire 20 rounds from 15 yards and have 16 of them fall within a 6 inch group.  Personally, I wish they would just utilize a 6 inch circle and not allow more than 4 shots outside of it (wouldn’t that be easier???), but I digress.  As can be seen in the photo below, all of my 20 rounds fell within the six-inch group requirement, meaning that I passed this test easily.

I believe these were the first malfunctions I have ever had with my OD Glock 19 (I’ve had a few with my black 19, most notably at the Rangemaster Tactical Conference–during the match!).  In this case, it was a most peculiar set of circumstances.  I was shooting on the White level on circle #3 when I experienced a classic stovepipe sticking straight up out of the ejection port.  I gave a firm tap to the magazine and then a hard rack to the slide and the casing and next cartridge ejected.  I did a press-check to confirm a round was in the chamber and fired my next round.  This casing also became stuck in roughly this configuration (this is not a photo of it at the time, as the range I was using frowns on photography on the line):

I again executed a tap-rack, but the casing would not budge.  I did it again, but found that the casing had bent enough that the open end of the casing was wedged hard under the extractor.  I inserted my pen underneath it and flicked it out.  I had no more issues for the rest of the range session.

I include this information here for three reasons.  First, I am confident that this was not a case of user error, limp-wristing, etc.  As I was engaging in a test focused on accuracy, I was able to take my time with all of the fundamentals for EACH shot.  I am quite confident my grip was solid.  Second, besides me, the only other commonality between this situation and the one I had at TacCon was the ammunition.  At TacCon, I was using a different Glock 19 with a factory magazine.  On this occasion, I was using a Magpul 15 round magazine.  I also sometimes feel like when I shoot with Freedom Munitions that some rounds just sound different and have a different recoil impulse.  I am suspicious that some of their cartridges may not have the full amount of powder.  John has had nothing but success with Freedom Munitions, but the opinions of a number of instructors from whom I have taken classes as well as internet lore suggest that Freedom Munitions may be subpar.  I still have plenty left to shoot, so we shall see.  Finally, I included this story because, had this happened with my defensive ammunition during a defensive encounter, I would have been in bad shape.  Something for me—and you—to think about.

I enjoyed shooting this course of fire.  It is easy to shoot it at virtually any range, since it is a pure accuracy-based drill that does not require rapid fire, drawing from a holster, or any of the other commonly frowned-upon activities of public indoor ranges.  I plan to shoot the levels as well as the Instructor test with some of my other pistols to see if I can do as well.

Thanks for reading.  If you have any questions or comments, please post them below or on our Facebook page.  I hope you join John and me in challenging yourself with this test, and if you do, let us know what you were shooting and how you fared.

5 thoughts on “Shooting the NRA “Basics of Pistol Course””