I must admit that I have been intrigued with the advent, over the last few years, of appendix inside the waistband (AIWB) holsters that incorporate some sort of magazine carrier, either integral or one that attaches.  The idea has appealed to me for two reasons.  First, the concept of an all-in-one, grab-and-go package sounded good from a convenience standpoint.  Second, concealing the pistol and spare magazine together might have benefits in the sense that the user does not have to worry about concealing the pistol on one side and the magazine on the other.  If you can conceal one, theoretically you can conceal both together.

The first holster of this type that I ever saw or had experience with was the G Code Incog holster.  A friend of mine had one and let me sample it briefly at this class in 2014, and I liked it enough for those couple of minutes to order one and wait the then 8 weeks to receive it in the mail.  The Incog is available with an optional “magazine caddy” that attaches to the holster.  The good part of this design is that the nature of the attachment allows some flexibility for the caddy, meaning that it can move a bit with the user’s body independent of the holster itself.  However, I was never happy with the trigger coverage of the Incog, nor its belt clips (designed to lever the gun into the user’s gut, I found they tended to lever my belt outward AND catch my fingers when I would clear the cover garment).  I sold the Incog within about a month.

Fast-forward a couple of years and the T.REX Arms Sidecar holster was “all the rage”.  Although a bit intrigued by the design, a cursory examination of online photos coupled with some online reviews had me looking elsewhere.  The design of the “claw” on the TRex holster was an obvious potential failure point (it is merely a piece of bent kydex and lacks any sort of reinforcing ribs) I was able to identify from photos (and confirmed in numerous photos I saw of cracked claws from this holster), and I had also read some reviews where fit and finish were issues.  Finally, I am just not a fan of the owner of the company, both his “social views” and his apparent speeding up of his own shooting videos to appear faster.

There were a number of other companies making similar models, however, including some using better components.  So it was that one day, while browsing the classifieds on one of the gun forums, I came across the Crazy Eyes Holsters Sidecar for the Glock 43.  Owning a Glock 43 and, at that time, not entirely pleased with the one holster I had for it, I decided to spring for it to see what this concept was all about.

The Sidecar retails for $79.95 plus shipping, but I got mine in the $45 range in like new condition.  What initially attracted me to this holster was its use of Raven Concealment Systems belt clips and claw.  The RCS belt clips are, from my experience, the best of their type, and their claw has been considered good enough by many other well-regarded holster makers that they use them rather than make their own.  The model I got had a black carbon-fiber look on the front with red on the back.  Not the color scheme I would have chosen, but the price was right!

Upon receipt of the holster, I saw that its workmanship was first rate.  The Glock 43 fit perfectly, and made an audible “snap” sound when fully seated.  Likewise, the magazine carrier portion of this holster held a magazine very well.

Workmanship was evident in other areas as well.  Edges of the kydex pieces all around the holster were nicely rounded/beveled so as to limit discomfort in its inside-the-waistband position.  There was also a screw that allows the user to adjust retention on the pistol, a handy feature, as I have found some holsters that lack this feature seem to hold the pistol either too loose or too tight.  I also must say that, despite what appears to be the large size of this holster, I did not find it uncomfortable to wear (I do believe that a Glock 19 in such a holster would be a bit much, at least for me).  Bending over and doing other such activities were not issues for me while wearing it.

There isn’t anything really “bad” about this holster in terms of design or workmanship.  However, I did find that this holster did not really work FOR ME.  Why?

1.  Lack of a wedge.  This is a minor issue as I have added my own wedges of my own design to several holsters.  As can be seen in the photo below, I added a small section of “loop” material to the back of this holster so that I could use the “hook” part attached to a foam wedge to lever the grip portion of the pistol inward.

2.  Angles.  More of an issue for me is that this holster just did not match the “curvature” of the front of my gut.  The angle of the holster was just a little too shallow or flat; I need something with a more pronounced angle to it.  Because of the shallow angle at which this holster is constructed, I always felt like either the grip of the pistol or the spare magazine were always printing.  I tried the holster with the claw, and that sort of “popped out” the spare magazine on the opposite side.  Removal of the claw tended to make the grip of the pistol stick out.  Such is the shape of my physique that I could not find the “Goldilocks zone”. 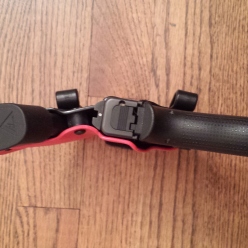 It was a fear of mine that the built in bend in this holster might not work for me, but there is no way to know without trying it.  Heating the holster with a hair dryer to try to effect a more pronounced bend was rejected as an option for a couple of reasons.  First, it would not work due to the pre-cut shape of the two pieces of kydex (the front piece of kydex would need to be slightly longer to be able to accept more of a bend).  Second, I did not want to screw it up or weaken the holster in any way!  In the end, I sold the holster on the same forum on which I had purchased it, losing a total of five dollars on this experiment.

To our readers who are considering such a holster, I offer this advice.  If you buy this style, you will run the risk of it not fitting your body type.  It is possible that a better approach would be to seek a holster that has some built in flex, like the Tier One AGIS (a holster I have no experience with, but which appears to have promise).  Another alternative would be to simply wear a separate magazine carrier inside the waistband alongside your AIWB holster, a concept I have been playing with recently.