My blog partner John has mentioned more than once in his articles on shotgun patterning (see here, here, and here) how I too have been working on an article addressing this same need.

John and I largely ignored the shotgun—in terms of training classes and articles—during our first couple of years writing for the blog.  It is interesting that we both gained a renewed interest in shotguns after attending the Rangemaster Tactical Conference in 2017 (see our AARs here and here).  There, John took Tom Givens’ four-hour seminar on the shotgun.  I sat in on the latter half of that same seminar after a shorter session I had attended with Claude Werner ended.  Within about a month, I took my first shotgun class with Ben and Rachel DeWalt of OnSight Firearms Training.  That class served as a solid introduction for me on the use of the shotgun.  Though I left class a bit bruised up, after a few months I started to get the itch to do more shotgun training.  A month ago, John and I took Tom Givens’ One-Day Defensive Shotgun class (see John’s AAR here), and now I feel like I am really “getting it.”  My current plan is to try to take a shotgun class every year moving forward.

I feel like John did such a good job in his series of articles explaining the how and why of shotgun patterning that I ended up scrapping most of my (inferior) article.  I thought instead that it might be useful to pattern my own shotgun in a similar manner so that our readers could see for themselves any similarities or differences between our shotguns. 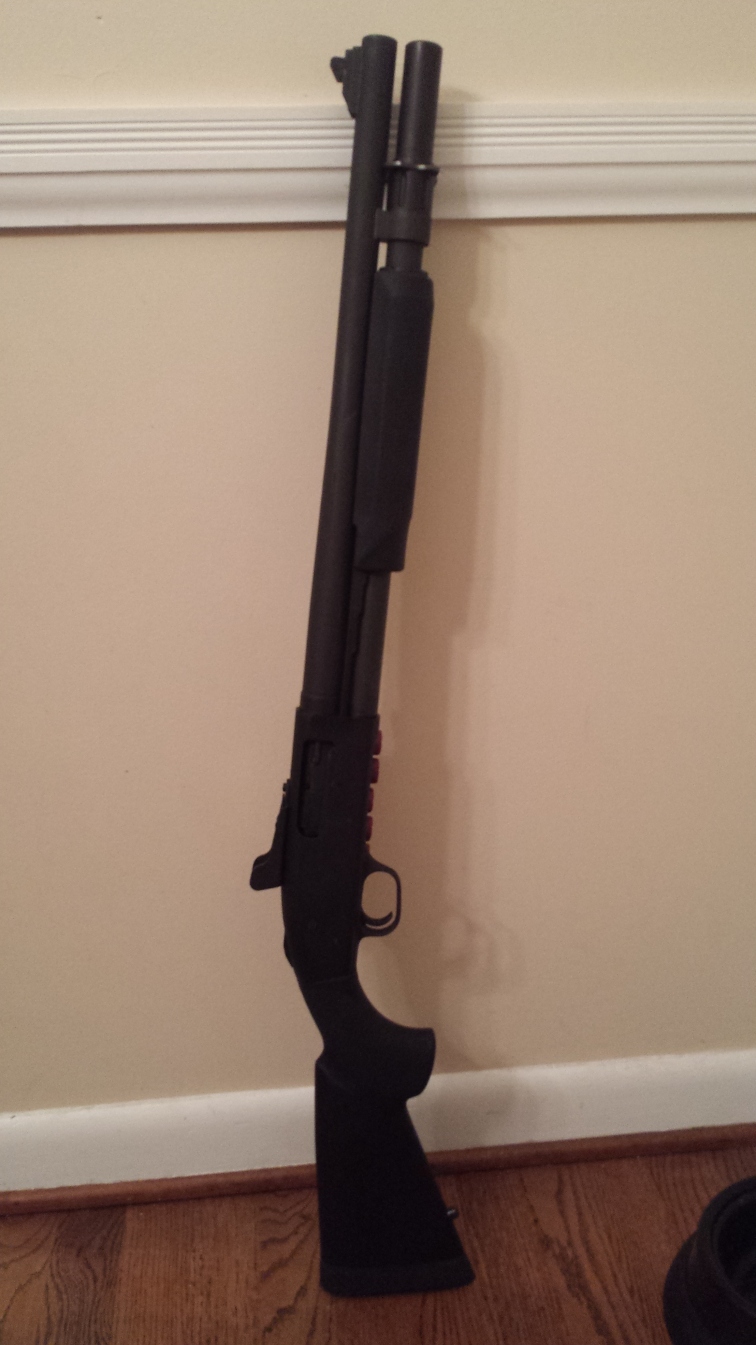 My preferred shotgun is the Mossberg 590A1, and I outlined the rationale for my choice in this article.  Since writing that article, my shotgun has been through the above-mentioned Givens class along with several range trips to pattern different loads.  The only change I have made to it since I wrote that article was to replace the Surefire forend with a simple Hogue model.   I did this prior to attending the Givens class as a lesson learned from the OnSight class the year before.  The switch on the Surefire forend battered my thumb over the course of 215 rounds, and I wanted to avoid that this year.  Currently, I am liking the sleeker setup sans Surefire forend, and so the Hogue forend remains in place.  To date, I have experienced no malfunctions with my Mossberg.  This platform has inspired such confidence that I have begun the process of purchasing a second, similar model, only this one will be a factory short-barreled shotgun.

Recently, I went ahead and patterned my shotgun using three different loads.  I chose some of the same or similar loads that John patterned in his articles.  In John’s first article, I felt like he did a good job explaining his rationale for the distances at which he patterned.  Doing a head shot at 5 yards would reveal whether or not a shot like this one would be possible:

While I am not a police officer, in a home defense scenario I suppose the need to take a hostage shot is possible.  Like John, I then shot a 3 shot group at 15 yards in order to see how the shotgun might pattern at that distance.  The longest shot in my house, and it would take some fairly incredible circumstances to occur, is about 26 feet, or about 9 yards.  Shooting a bit beyond that distance would provide certain assurances about what each load is capable of in the worst of circumstances.  I chose not to shoot at 25 yards in order to better preserve the targets and because, at this point, I did not see a need to pattern at 3 times the furthest distance inside my home.  One day though…

The targets I used were homemade from sheets of cardboard I found in my garage, as my local range does not sell any cardboard targets.  To each I added an 8 inch circle and then a smaller 4 inch circle to mimic the target zones in John’s targets.  Note:  I actually ran this test a few weeks prior, but on paper targets.  Paper targets without any target backers got hopelessly torn up so that the actual pattern was difficult to discern.  If you have to pattern your shotgun at a range where your target will simply “hang”, I highly recommend using cardboard targets.

For the non-Flite Control 9 Pellet Buck, the 5 yard pattern in the “head” stayed easily within the circle, making about a 3 inch group.  Considering a 5 yard shot inside my home would be a pretty “average” distance (across a room, down a short hallway, etc.), this would not be a terrible choice for a home defense load.  At 15 yards, the spread is much more considerable (especially when compared with the patterns of the other loads below), but I only lost a few pellets outside the 8 inch circle of the target. 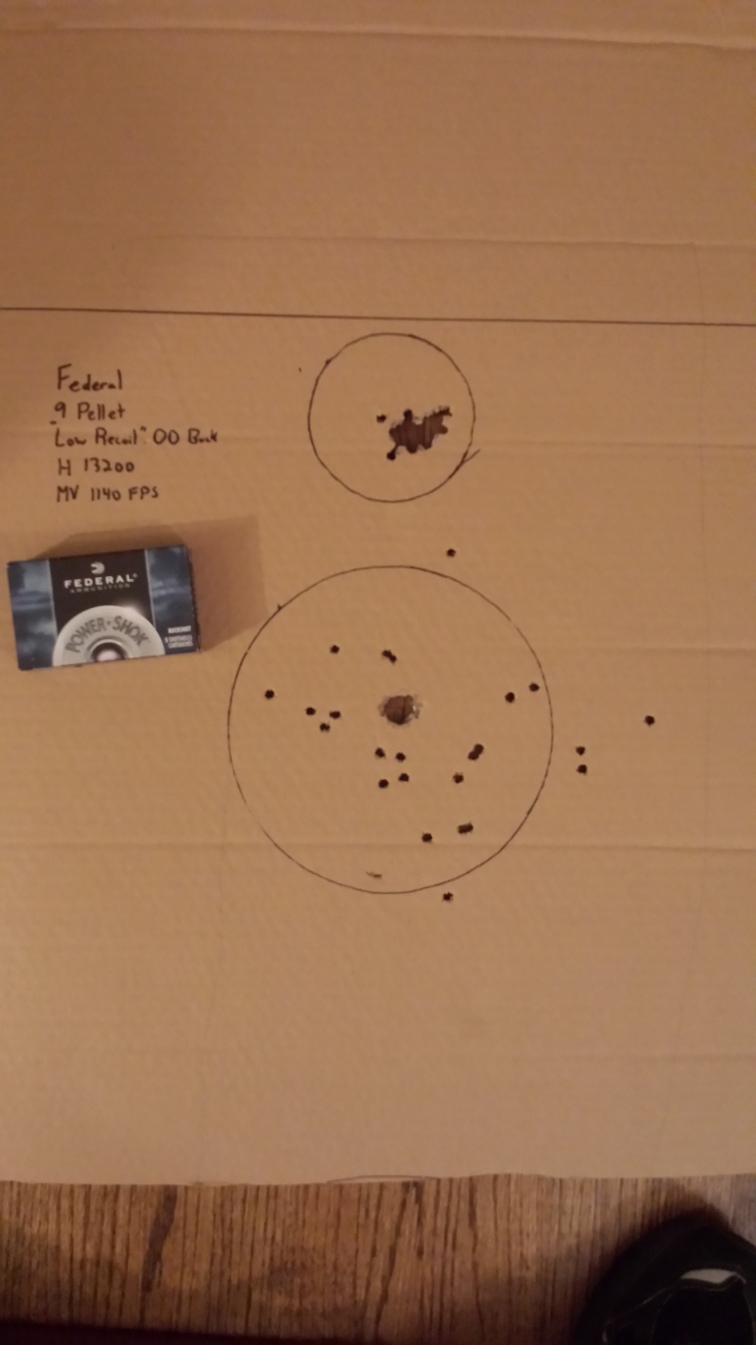 For the Flite Control 9 Pellet Buck, the 5 yard pattern is one ragged hole, while the 15 yard shots provided a series of small groups that easily fit inside the 8 inch circle. 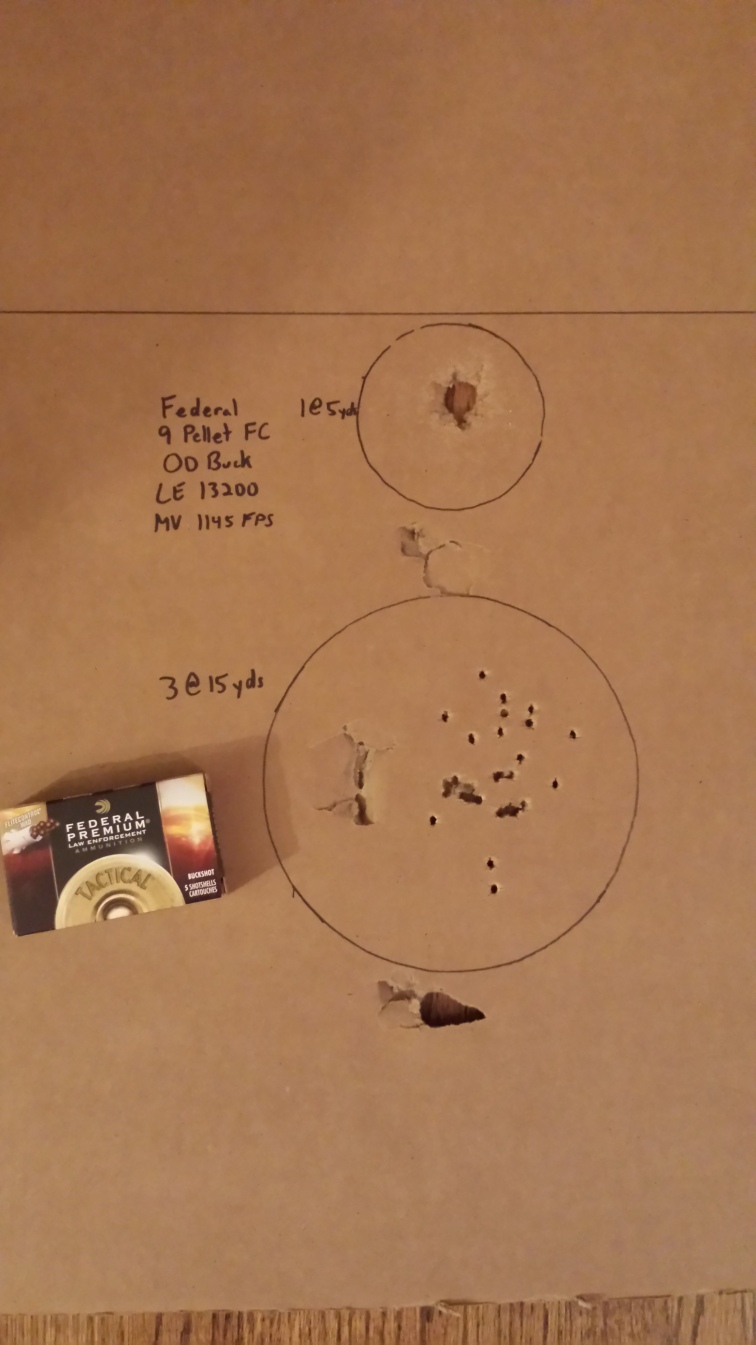 For the Flite Control 8 Pellet Buck, the 5 yard pattern is again one ragged hole only slightly larger than the bore of the shotgun.  The pattern at 15 yards is even tighter than the 9 pellet.  Indeed, the pattern is difficult to make out, as the pellets, even at this distance, still hit with the wads. 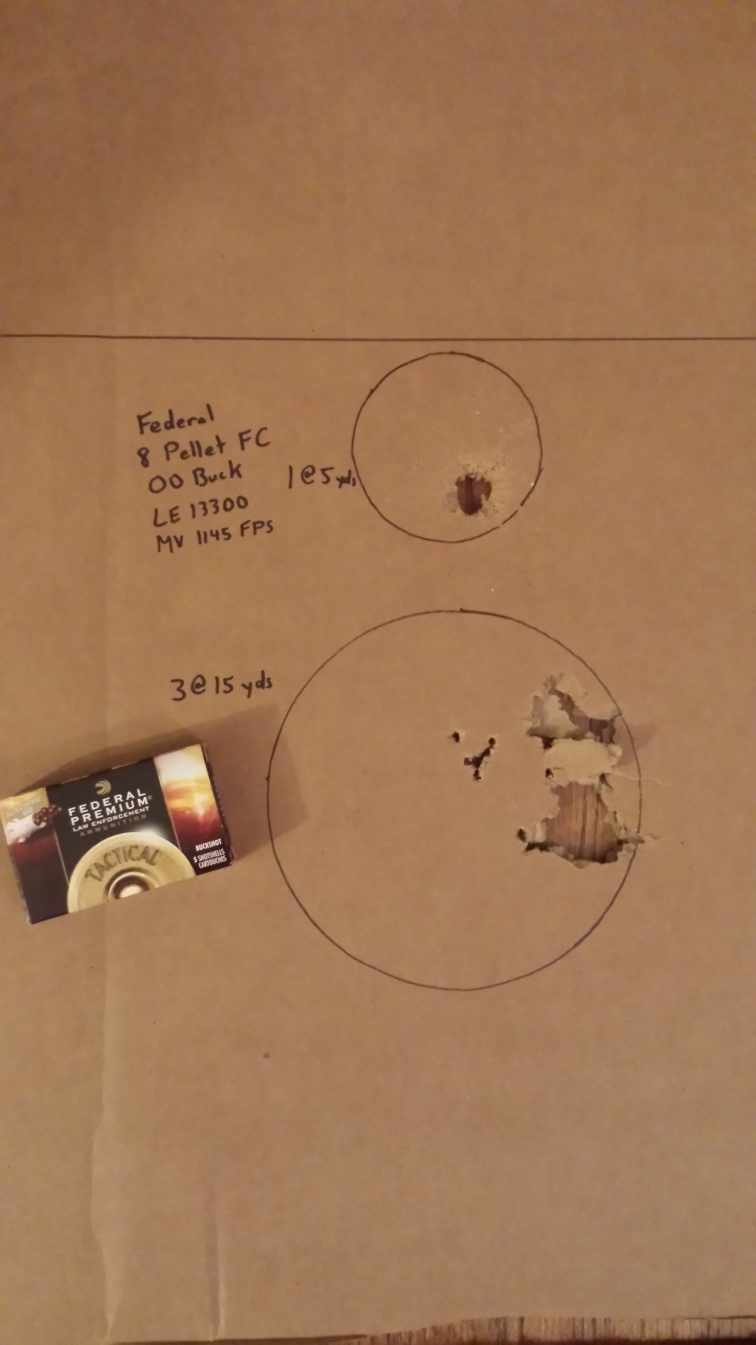 Although some would argue that more spread of shot is better in a home defense scenario, allowing for less precise aiming, the wider spread of the non-Flite Control buckshot at 15 yards makes that pattern a little less precise and predictable.  In a situation in which I am defending my home, a house populated by my wife and children and only a few yards from my neighbors, I like being able to account for every pellet.  In addition, I do not choose a shotgun as a home defense platform because it does not require precise aiming.  I choose it because of its potentially devastating effect on target.  Accordingly, I am comfortable utilizing either of the Flite Control rounds I tested as home defense ammunition.

Articles about shotgun patterning abound online, but a few exemplar versions include Tom Givens’ (who else?) article from the January 2018 Rangemaster newsletter (opens to PDF) and this pair of articles from Chris Fry of MDTS Training (here and here), which focus on home defense loads for the shotgun.

As always, thanks for reading.  If you have any questions or comments, please post them below or on our Facebook page, as we always welcome civil discourse.