Over the last three years, I have attended quite a bit of training with Tom Givens.  I took two seminars with him at the Rangemaster Tactical Conference in 2017, and another seminar in 2019.  I also took a one-day Defensive Shotgun class with him, a two-day Combative Pistol class, and his three-day Firearms Instructor Development class.  I cannot be sure, but I would say that in probably two-thirds of those events, he mentioned that the most dangerous place in the United States is the parking lot at your local Walmart.  I have no way of proving or disproving this statement, but even if it is not quite true, it also probably isn’t far off the mark.

I am not a regular at my local Walmart.  I might go there six times per year.  And although “my” Walmart is as nice a Walmart as I have ever seen (clean, neat, located in a good neighborhood, etc.), I make it a point to only go on weekend mornings before 10 AM.  I have gone at other times and, ah, that is why I ONLY go on weekend mornings before 10 AM!  I do not know where all the customers who shop at this Walmart live, but suffice is to say that they are just like the customers at every other Walmart in the United States.  Enough said.

On Sunday morning I decided to stop by Walmart to pick up a couple of things.  Just like my visits to gas stations, I do a bit of a circuit around the lot before parking.  I like to see who is standing around without obvious purpose, which cars in the parking lot are occupied, etc.  While approaching my preferred parking section (if possible I like to park near the Garden Center, which I usually find gives me a reasonably quick entry and exit), I spotted this guy in his Suburban: 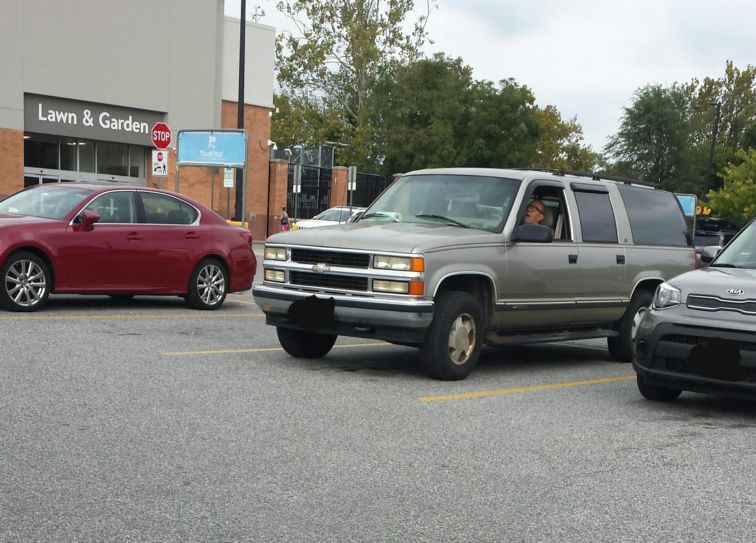 This, ladies and gentlemen, is NOT the place I would choose to take a nap, much less take a nap with the window down (does it matter at this point if his doors are locked?).  Is this guy armed?  Does he have solid unarmed combative skills?  Has he taken a vehicle tactics course, like this, this, or this?  NONE OF THAT MATTERS!  He is totally exposed!  Bad things can start happening to him before he even wakes up.

I should probably note here that I found this guy by using a technique I probably first read about in Jack Maple’s excellent book “The Crime Fighter”.  In it, Maple—one time New York City Transit Police officer and later Deputy Commissioner of NYPD—described how he learned to spot criminals.  He would simply look for “prey”, and then look for who was paying attention to the “prey”.  In short, he had to think like a criminal.  Now, I am no police officer (or criminal), but even I could see that this guy looked like “prey”.

I am not going to talk from my high horse and claim to never have napped in my car.  Indeed, when I was in graduate school, I used to do so fairly regularly.  Though the university I attended is located in the city, it has satellite campuses outside the city, and many of my classes were at these alternate locations.  I would often leave work as soon as I could in order to beat the traffic out of town, eat something, and then take a short nap in my car before class (they usually started around 7 PM).  Of course, I did so in a busy, well-lit business park where the satellite campus was located, with my windows closed, doors locked, and “tools” I was probably not supposed to have on campus at ready hand.  Smart?  I will let you be the judge.  But I was not nearly as exposed as this guy and I also was not parked in a Walmart parking lot.

In short, napping in your car may not be the smartest or safest thing to do, but there are certainly just a handful of things you can do to make it slightly safer.  Safest location you can find, doors locked, windows closed, “tools” nearby, etc.  It is not the best way to avoid a dedicated assassination attempt, but most of us are probably not on someone’s hit list.  A robbery or carjacking is much more likely for most of us, and even these simple steps can help mitigate that risk.  While I generally advocate sleeping at home, sometimes “ya gotta do what ya gotta do”.  So, if “ya gotta”, at least do not expose yourself the way this guy did.

Thanks for reading.  If you have any questions or comments, please post them below or on our Facebook page, as we always welcome civil discourse.  Please note that at least one link above will take you to our Amazon affiliate page.  If you choose to purchase the item (or any others by using the affiliate link at the top of every page), we receive a small percentage of the purchase price at no cost to you.  This is a great way to support us just a bit, and we appreciate any and all support.  Thanks again.

7 thoughts on “Asleep at the Wheel”